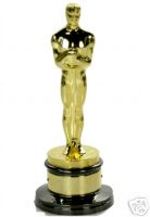 Good films don't get watched. I suppose it is just that simple. But apparently the Oscars are to be considered a flop this year, with one of the lowest ratings in 20 years. Sigh. The films, pundits say, were too highbrow, and nobody had seen them.

Too highbrow. Sigh. Why is everybody so stupid? Or rather, why are most people so stupid? I am disgusted and nauseated by this.
Posted by Miglior acque at 10:42 pm

It's AMERICA, baby. You're dealing with a demographic a significant number of whom believe (a) they've been abducted by UFOS (b) the world began with Adam and Eve and (c) Brokeback Mountain was created by agents of Satan to tempt their obese male children to ruination.

Did you see Crash? Isn't it completely inanely mediocre???

Golly, I really enjoyed it. I squirmed my way through it all, and for the only time in my life I nearly left the cinema...not because it was bad, but because it was so good.

Tonight I saw Syriana, which I really enjoyed. It's depressing, again, the way that Good Night and Good Luck is. It is a study in greed. That's basically it. It's good. I enjoyed it.

By the way, have you heard of Anna Russell? I'm thinking of your moniker, you might like her piss take of Wagner. Very very funny.

What, no love for Walk The Line?

Well I haven't seen it yet actually, so it's not really a case of no love for WTL. I'd like to see it, I've heard it is quite good.