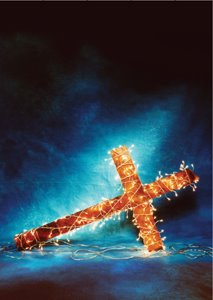 Arthur Miller's penultimate play, Resurrection Blues, is having its European premiere at the Old Vic in London. The stars have been assembled (James Fox, Neve Campbell, Matthew Modine...) and Robert Altman directs. It's a recipe not only for a hit but also for some great theatre. And yet one is left with a curious feeling of having fallen victim to a huge hoax. This play is so awful that I cannot believe that a) Miller (whom I love) wrote it, b) Altman (whom I love) directed it, or c) that any of the actors have ever stood on stage before. The whole thing really is that bad. It's clear that Miller is angry (Corporate America blah blah blah) but the anger has been diffused throughout all the characters so that it becomes a malaise; the humour is so misguided that there are moments in the play when one would think a panto was being performed.
The military dictator/leader of an unnamed South American country has sold the rights to broadcast the execution (a crucifixion) of a revolutionary by an American media corporation. The broadcast's director has scruples about what's being done and try to persuade the dictator not to go through with it. Meanwhile, the dictator's brother has returned from study exile (he was a pharmaceutical mogul) to plead for this revolutionary's case. The people of this country begin to believe this revolutionary is God. So the play is about how people are oppressed, how they believe, how Corporate America doesn't understand such things and only understands money, how people need faith, and lots more.
In a way that's exactly the problem. There are far too many strands in the play for it to gel together. The cast is so lacklustre (I cannot remember one single line from the play) and the direction so flawed that I shall wait some time before I go back to the Old Vic. The whole thing is such a pity.
Posted by Miglior acque at 9:25 pm