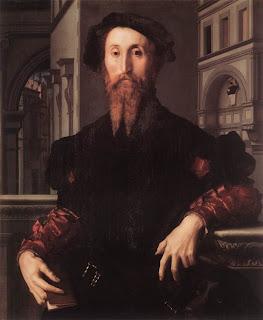 
I am still alive. I feel I should say this since it has been an unforgivably long time since I last posted. Things have been busy in the land of Miglior Acque, book buying has been proceeding with gusto, and the work is proceeding at a rate that I can only describe as flat out. So, that's that. Books. I have recently been lucky enough to acquire Storia della letteratura italiana, gen. ed. Enrico Malato (Rome: Salerno Editrice, 1995-2002), which was originally published in 14 volumes. It was then reissued with Il Sole-24 Ore in 24 volumes. The pagination is the same and so is the text, so one can reliably cite them and use them. They are really excellent, though some of the medieval chapters have been republished in revised monograph format. This is the case for (the excellent) Lucia Battaglia Ricci, 'Giovanni Boccaccio', which came out in Vol. 2, Il Trecento [1995], pp. 727-877, but which was republished in a revised 2000 monograph. In any case, I'm delighted to have it and am often using it. There have been some good books come up at Bennett & Kerr lately too, such as Ricci's 1965 Monarchia, which I'm glad to have, though I have my eye on Prue Shaw's new edition for the Edizione nazionale. I was particularly happy to get Giuseppe Mazzotta, The World at Play in Boccaccio's Decameron (Princeton: Princeton University Press, 1986), and Dante, Poet of the Desert: History and Allegory in the Divine Comedy (Princeton: Princeton University Press, 1979). I also recently got my hands on a lovely uncut copy of Giovanni Boccaccio, Il Decamerone, ed. by Giuseppe Petronio, Nuova raccolta di classici italiani annotati, 3, 2 vols (Torino: G. Einaudi, 1950). This is an edition not that easy to find here and it was very reasonably priced and I needed it. Petronio has also produced a couple of other important essays on the Decameron such as Il Decamerone. Saggio critico (Bari: Laterza, 1935); and a couple of articles reprinted in I miei Decameron (Roma: Editori Riuniti, 1989).

The Cambridge University Press booksale this January was where I spend a few hours at the beginning of term and I picked up a few bargains that I was delighted with: they sell the hardbacks for £7 and the paperbacks for £3. Particularly pleasing were: Piero Boitani, English Medieval Narrative in the Thirteenth and Fourteenth Centuries, trans. Joan Krakover Hall (1982); Susan Woodford, Looking at Pictures (1983); Jeryldene M. Wood (ed), The Cambridge Companion to Piero della Francesca (2002); Jeremy Tambling, Dante and Difference: Writing in the Commedia (1988); Peter Humfrey (ed), Venice and the Veneto, Artistic Centers of the Italian Renaissance (2007); Fiona Somerset, Clerical Discourse and Lay Audience in Late Medieval England (1998); Jessica Rosenfeld, Ethics and Enjoyment in Late Medieval Poetry: Love after Aristotle (2011). A pretty good haul, all things considered. I was also quite delighted to pick up Nicolai Rubinstein (ed), Florentine Studies: Politics and Society in Renaissance Florence (London: Faber, 1968) in G. David & Sons a couple of weeks back. A lovely, elegant thing really.

In January I had a very brief but very enjoyable visit to Florence to visit some colleagues, to work in the library, and to see the wonderful Bronzino exhibition at Palazzo Strozzi. I was kindly hosted by William E. Coleman and Edvige Agostinelli, who are in the final stages of a very exciting project editing Boccaccio's Teseida - they are preparing an edition for the Chaucer Library, which will be a text they believe is closest to what Chaucer had access; an 'old spelling' edition with SISMEL; and a digital facsimile of the autograph, BML, MS Acq. e Doni, 325. They've been working hard on the autograph and have a whole host of new readings to offer. It is important work and will be very exciting to work on.

At the BNCF, I was able to look at a manuscript, Magliab. II, II, 8, which I'm writing about right now: it is the oldest extant witness to the Decameron and has been the subject of some very exciting work by Marco Cursi: see esp. his Il Decameron: Scritture, scriventi, lettori. Storia di un testo (Roma: Viella, 2007), but see too 'Per la più antica fortuna del Decameron: mano e tempi del «Frammento Magliabechiano» II, II, 8 (cc. 20r-37v)', Scrittura e civiltà, 22 (1998), 265-293. I'm picking up some crumbs left behind.

The Bronzino exhibition was a revelation. Verily. A magnificent achievement for all concerned, with a beautiful, serious, scholarly catalogue (Carlo Falciani and Antonio Natali (eds), Bronzino: Painter and Poet at the Court of the Medici [Florence: Mandragora, 2010]). The great portraits were on display, especially 'Eleonora of Toledo with her son Giovanni', and I stood and marvelled at her dress: you can see the threads, and to be honest, it looks like it has been woven rather than painted. And I was intrigued by the two Panciatichi portraits. The famous portrait of Lucrezia is the subject of a wonderful essay in the catalogue by Elizabeth Cropper, which argues that the religious views of the couple offer ways to interpret some parts of the painting, such as her chain and its device reading amour dure sans fin. I got to wondering about his portrait. The background is just so odd, perspective that does not quite make sense, buildings that cannot be identified, possibly recognizable Florentine (Michelangelesque). And at the same time, completely...bonkers. Perhaps, if there are dimensions to the Lucrezia portrait that were executed with discretion because of a whiff of unorthodox Lutheranism, there might be new ways to interpret this portrait too? I'm not exactly suggestion that it merits some sort of Dan Brown wild symbology goose chase, but maybe the background is begging a question that has not yet been asked. Why is it so elaborately impossible?
Posted by Miglior acque at 8:56 pm No comments: