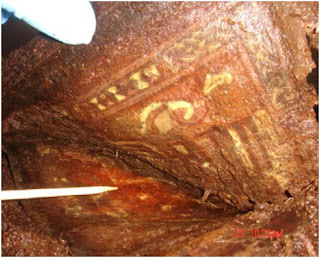 Some time ago I blogged about the discovery of the Faddan More Psalter in Co. Tipperary in 2006. Conservation work has been carried out on the Psalter which has allowed for some startling discoveries (see here for more). These are discussed with some experts in a wonderful documentary on RTE called 'Treasure from a Bog' (produced by John Murray and written and directed by the great Alan Gilsenan). This documentary goes through the huge technical challenge that the Psalter presented in stabilizing its condition and retrieving as much as possible for study. About 15% of the book survives, and one single page survives almost intact. This offers valuable clues as to the construction of the book and how the parchment was prepared, pricking, ruling, and the like. However, one of the most exciting, and puzzling, discoveries relates not to the book itself but rather to its leather cover. Very few of these have survived so this was already an extraordinary discovery. Analysis revealed that the inside of the cover was lined with a material not found at all in 8th/9th century Ireland: papyrus. This is such an unexpected discovery that its importance and significance cannot be overestimated, but quite what it means is anybody's guess! Does it connect the early Irish church with the Middle East? If so, what does that mean? Exciting stuff. The Faddan More Psalter and its cover are expected to go on display in the Summer of 2011. You can be sure of an update.
Posted by Miglior acque at 1:47 pm No comments: 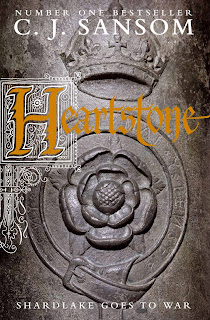 It is the summer of 1545 and the king prepares for war with France. Master Matthew Shardlake, the lawyer who has been keeping his head down and trying not to attract the attention of those many grasping and ruthless courtiers who seem to congregate around Henry and his queens, receives a letter from Queen Catherine Parr. He cannot refuse her request to investigate what has led to the suicide of the son of one of the queen's old servants. It is a hopeless case. He and his opposite number, the very disagreeable Master Dyrick, are charged with travelling to Hampshire to take depositions. While there Shardlake decides to make inquiries about a woman he has been visiting in Bedlam and the circumstances that lead to her madness. Thus Shardlake finds himself weaving in and out of two slowly unfolding, terrible, stories. Things come to a head when he must confront enemies old and new on board the Mary Rose.

Sansom is in great form in this marvellous novel. He has a wonderful sense for atmosphere, especially in the Herician court. His vulnerable hunchback lawyer is a figure always on the outside, wanting to be accepted but at the same time resisting being involved since it only leads to danger. The religious upheaval is another wonderful context: everyone is under suspicion and suspects each other. An old cleric, a little too nostalgic for the 'old ways', in a discussion about faith with Shardlake mentions that he doesn't like mysteries, that he needs to solve them. This is true in many ways: Shardlake looks first for the human hand behind the unexplained. The novel is long but not, I think, overlong. It also skillfully sets up the next installment, with a brief but memorable meeting with the young daughter of Anne Boleyn, the Lady Elizabeth. She will, inevitably, play some part in the next novel. In fact, I think she'd have rather enjoyed reading this novel and when you read you'll know why.
Posted by Miglior acque at 1:01 pm No comments: