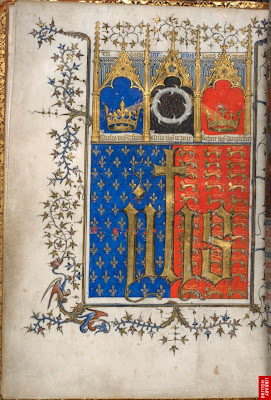 I have not yet managed to get to this marvellous and lavish exhibition but draw my reader’s attention to the review by my learned friend and colleague David Rundle, over on Bonae litterae.
The image is via the British Library's excellent Facebook page, which has several albums of photos of manuscripts in the exhibition.

‘A Letter to King Richard II’
This unusual manuscript is the fruit of over a decade of diplomatic rapprochement between England and France. The Letter to King Richard was written in support of Charlves VI of France's policy of reconciliation with England. The image here illustrates this union, with the crowns of France and England joined through the peace of Christ, represented by the Crown of Thorns, between them.
Philippe de Mézières, Epistre au Roi Richart.
Paris, 1395.
Presented to Richard II
Royal 20 B. vi, f. 1v
© The British Library Board