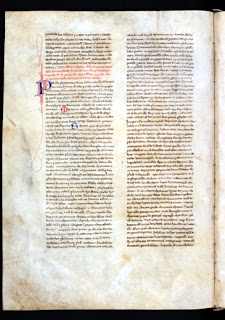 Of Boccaccio's autograph manuscripts, it is arguably that of the Decameron that has attracted the most attention in recent years. Now in the Staatsbibliothek - Preussischer Kulturbesitz, in Berlin, under the shelfmark "MS Hamilton 90", this fascinating manuscript, produced in the 1370s, clearly shows an author concerned with the 'packaging' of his great masterpiece. This is all the more interesting because the late Boccaccio is often thought of as more interested in the production of Latin works, as repudiating the earlier, youthful and foolish vernacular work. The manuscript certainly disturbs any neat division anyone might wish to draw between these two Boccaccios.

While there had been some talk earlier in the twentieth century of this being an important manuscript, but it was not until the publication in 1962 of Vittore Branca and Pier Giorgio Ricci, Un autografo del Decameron (Codice hamiltoniano 90), (Padova: C. E. D. A. M., 1962), that its true importance was realized. Branca and Ricci identified it as an autograph and the former set about producing a critical text based on it. This was subsequently published as Decameron: edizione critica secondo l'autografo hamiltoniano (Firenze: L'Accademia della Crusca, 1976), and appeared simultaneously as volume 4 of Tutte le opere di Giovanni Boccaccio, gen. ed. Vittore Branca, Classici Mondadori 10 vols (Milano: A. Mondadori, 1964-1998). The 600th anniversary of the death of Boccaccio fell in 1975 and was the impetus for a good deal of publications on the author and his work. So, in 1974, there appeared, under the auspices of Charles S. Singleton, Decameron: Edizione diplomatico-interpretativa dell'autografo Hamilton 90 (Baltimore: Johns Hopkins University Press). This contains a very important description of the manuscript by Armando Petrucci, 'Il MS. Berlinese Hamiltoniano 90. Note codicologiche e paleografiche' (pp. 647-661); as for the rest of the volume, it really never recovered from the scathing review by Branca in Studi sul Boccaccio 8 (1974), 321-329.

In 1975 Branca produced a beautiful facsimile of the manuscript: Decameron: facsimile dell'autografo conservato nel Codice Hamilton 90 della Staatsbibliothek Preussischer Kulturbesitz di Berlino, Manus summorum: autografi dei capolavori nella civilità universale riprodotti in facsimile (Firenze: Alinari). Well, dear reader, while perusing on Ebay what did I find only a rather reasonably priced copy of the said facsimile and before I could say Buy It Now, it was winding it way from sunny Italy to the dark and wintry North. I am so delighted to have this. It is invaluable to be able to check each passage from the printed text against how it appears in the autograph, keeping an eye on how the punctuation and capitalization are marked out. This has been rather wonderfully discussed by Lucia Battaglia Ricci in her Boccaccio (Rome: Salerno, 2000; = 'Giovanni Boccaccio', in Storia della letteratura italiana, ed. by Enrico Malato, 12 vols [Roma: Salerno Editrice, 1995], Vol. 2: Il Trecento [1995], pp. 727-877), where she suggests that Boccaccio distinguishes between narrative layers that are not always easily reproduced in modern printed editions. She makes some very important points too about the look and feel of the manuscript: it is a rather serious book that looks for all the world like a university text. 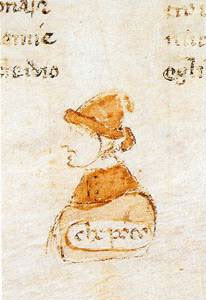 The beautiful and witty catchphrases are also a constant source of fascination for me. There are thirteen catchwords in the manuscript though there were others since the final three quires are missing. The one illustrated above occurs on f. 71v and represents Pietro di Vinciolo, at Dec v 10 37; his text reads 'che poco'. Branca saw in these an illustrative programme reflecting the work's thematic concerns. So, the figures represent the triumph over Fortune, Love, and Wit (fortuna, amore, and ingegno), four portraits for each. Six of the ten male figures are merchants, which he saw as indicating the social class in which many of the stories are set and perhaps indicating too the presence of this class amongst the work's earliest readers and copyists. (While not dissenting [too much] from Branca, I have a somewhat different take on these catchwords, outlined in greater detail in the third chapter of my forthcoming Chaucer and Italian Textuality [Oxford: Clarendon Press]).

The facsimile was set and printed in the famous Stamperia Valdonega, in Verona, in 325 copies; mine is numbered 188. The photographs were taken by Alinari; the paper produced by the Cartiera Ventura di Cernobbio; it was bound by the Legatoria Torriai di Cologno Monzense, and comes boxed in brown cloth and card. It is a thing of sober beauty. And a great addition to the library.
Posted by Miglior acque at 2:40 pm

We still have a few copies of the facsimile.
giorgio@alinari.it