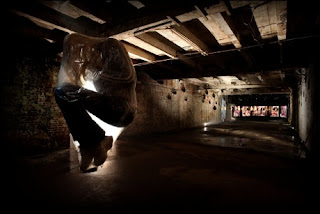 Dante: no other medieval author continues to exert such an extraordinary force on the modern imagination. Those who've read his Comedìa never recover; those who've never read him still feel like they know the Inferno, and because it has become such a cultural norm, they probably do know it. At Cambridge, Prof. Robin Kirkpatrick has been undertaking a massive critical and creative engagement with Dante over the past couple of years in a project entitled Performance, as well as a conference at CRASSH entitled Pain in Performance and 'Moving Beauty'. This year, on October 30th, Performance 2010 will further explore Dante and other texts in a series of performances, music, dance, art and drawings.

Recently, the Lazarides Gallery in London held an exhibition (suggestively) entitled Hell's Half Acre in which sixteen artists produced work evoking Dante's Inferno in The Old Vic Tunnels, under Waterloo Station. The setting is an important aspect of this exhibition. You enter and descend into a dark series of cavernous spaces in which artworks are lit by spotlights, passing a projection of a barking dog on the way. Curiously, this not on the list of works exhibited: perhaps no-one wanted to own up to such creature. Your eyes take some time to become accustomed to the low light - I nearly fell over in my first five minutes, adding to my disorientation and considerably heightening the effect! Steve Lazarides is a name often associated with Banksy though he represents over thirty contemporary artists and his vision in putting together this exhibition in this particular space is remarkable. This short review will no do justice to the richness of the exhibition.

The Old Vic Tunnels comprise five long, wide, intersecting tunnels accommodating an exhibition of installations, paintings, sculpture and film. This has allowed works to be displayed with fairly generous space, and installations have room to breathe. It also allows the darkness of the space between works plenty of room to exert itself on the viewer's imagination. The engagement with Dante is not always apparent. A plan of hell is provided in which the names of various artists are found in certain circles, sometimes indicating a whole circle, or merely sitting beside certain sins. There is obviously a good deal of humour involved here and surely a smile was raised when deciding where to put which artist: akin to taking the Inferno quiz. It implies structure, that the exhibition is mapped against the moral design of the Comedy; and while it was enjoyable to think about the interpretative possibilities that became available, I'm not sure that it has been so mapped quite so seriously. 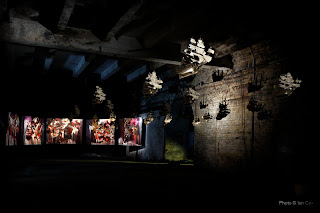 These are images of pain and suffering, of bodies being punctured. There are Boogie's Needles, and Paul Insect's Object Desire, a sphere of syringes with needles pointing out. Threatening, forbidding. Compelling and maybe beautiful too. There is the affecting piece by Jonathan Yeo, For What We are About to Receive, an installation of several panes of glass that need to be viewed from a specific angle to re-compose two kneeling supplicant figures. Here perspective and position are essential. To see the whole image you need to stand in one very specific spot. The act of viewing is rendered performative: it makes the art. But in another real sense, the art makes you. It forces you to stand in front of it, directly, head on. You are being controlled by it. There are often moments in the Comedy when we feel like that. 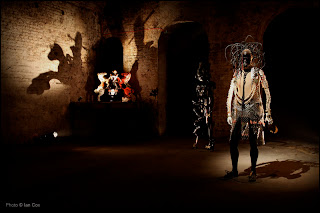 Bodies too are central to the explorations of Mark Jenkins in a sculptural installation entitled Chrysalis 1-5. These hanging bodies wrapped in clingfilm are quietly waiting, in the foetal position, for something. They are in a limbo-like stasis. Or, given that a chrysalis will become a perfected creature, perhaps there is more of a purgatorial state of becoming about these bodies. There is nothing of expiation in their hanging, it does not feel like a punishment or a purging. It points to a natural state on one hand; on the other it is deeply unsettling that their human form is so developed. They unsettle but they do not disgust. One is compelled by them, compelled to look at them, to try and see their faces (which are not visible). One wants to know who they are and why they are there. One waits for dialogue. Like them. 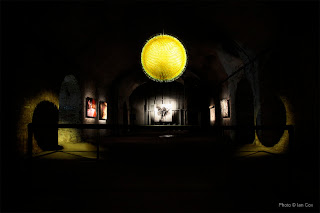 Readers of the Comedìa in the 1320s must have recognized figures from Florence, perhaps people they knew personally. Branca Doria could have read Inferno 33.136-138 and raised an eyebrow to have found himself there. So too, the present is more than enough for some of these artists contemplating Dante. A wonderful installation by Vhils entitled Bernie Made Off shows a painting of Bernard Madoff on a wall which has suffered serious damage. It is only when one looks more closely that it seems as if the damage, bullet holes, are in fact creating the image. It is an elegant and at the same time angry piece. Viewers have no trouble locating him somewhere in Hell. Quite far down actually. Even his name should have given something away: he becomes almost like the devils in Malebolge with their violent, cruelly parodic names, Malebranche, Malacoda, Scarmiglione, Alichino, Calcabina, Cagnazzo, Libicocco, Draghignazzo, Ciriatto, Graffiacane, Farfarello, Rubicante. Similarly, a piece by George Osodi, Niger Delta Series comprises photographs of the Niger Delta in front of a sand and oil installation. The stagnant, polluted water is surely reminiscent of the Inferno (cf. 'L'acqua era buia assai più che persa'; 'The waters here were darker, far, than perse', Inf 7. 103, trans. Kirkpatrick [Penguin, 2006], p. 63). Perhaps not subtle, but then again, not much about the destruction there is subtle. Again, one has no trouble imagining those responsible somewhere in Hell. 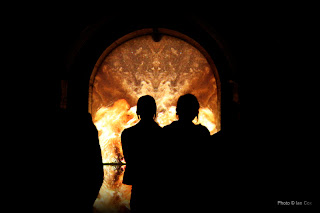 Hell was not the only part of the poem explored. A beautiful piece by Tokujin Yoshioka entitled Stellar had a white sphere hanging from the ceiling, made up of pieces of opaque crystal. A smoke machine filled the room (which was closed off with heavy drapes) with white smoke. I do not have a photo of this piece, but I doubt a photo would really convey the effect. Viewers walked under the sphere, rapt in attention, as we were enveloped. You could really only see people's faces, all moving in an ethereal and quite sublime appreciation of this strangely lit object overhead. It was paradisal and I found it a profoundly moving piece of work. Beautiful. Humane. And joyful.
Posted by Miglior acque at 11:00 am