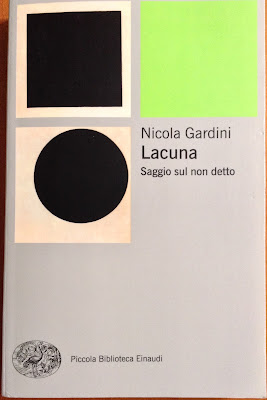 In this remarkable book, Nicola Gardini takes the theme of the unsaid, that which is omitted, avoided, skirted around, or suppressed. The opening sentence strikes a note that is maintained throughout the rest of the book: ‘Io sono innamorato della parola «lacuna»’; this passion drives what follows, with a rigorous attention accorded the very texture of the word. Gardini moves deftly deftly through a wide range of languages and literatures, and is careful to give both a micro and macro level of analysis, according to each moment of the argument.

It is an essay in the proper sense of the word (in the sense, that is, used by Montaigne, and in the sense used too infrequently now), a trying out of something, an attempt at exploring something. An essay should be risky. It should be uncertain. It should not be too sure of where it is going. And Gardini marshals all of these resources magnificently in this book. The sections are given strange titles, such as ‘Textus’, ‘La mente scultrice’, ‘Reliquie’, and ‘Il segreto di Octave’, and this estrangement is another important value in his prose. Some sections are very short, a couple of pages in length, and others range over fifteen or twenty pages. The result is a kind of pace that keeps you on your toes, but never leaves you at sea.

One of the book’s primary assertions is the importance of recognizing that which is unsaid, omitted, left out, and seeing how the partial points to completeness. As he says, on p. 5: ‘Occorre, in un certo senso, che diventiamo anche noi invisibili per riconoscere l’invisibile. Non c’è omissione testuale che non rimandi a una pienezza extratestuale; a questa sta al testo come l’ombra al corpo’. Thus the imperfect becomes replete with power and with potential.

The pages that follow then range over a dazzling array of authors, from the Ancient Greeks to the contemporary, weaving in and out with ease and conviction. The few passages on Dante are well worth chasing, but the attention to the detective story I found particularly enjoyable, a chapter (‘C’est du Sherlock Holmes’, pp. 145-167) that brings together Arthur Conan Doyle, Proust, Leopardi, Simenon, and Seneca.

The final chapter begins ‘A malincuore arrivo a chiudere questo libro’, and by then it is undoubtedly a sadness shared by the reader. Perhaps because of the unusual form of the essay, this final section, ‘Conclusioni’ discusses the composition of the book, explaining what he had set out to do, what changed when he began, and how he found himself rewriting the entire work. This final section is a kind of (anti)manifesto ‘On Method’, in which he shows how the intricacies of argument and experimentation are not easily planned in advance. Gardini leaves his readers with a cri de cœur, asserting forcefully that in this navigating of the said and the unsaid, literature is a paradigm of life, and its value is fundamental. ‘Le lacune della letteratura ci preparano, appunto, ad affrontare la nostra fine’: The lacunas of literature prepare us exactly to face our own end.

This is a great book.

Watch the book being presented here; and a previous post by me slobbers over his writing room in Milan, here.
Posted by Miglior acque at 8:18 am No comments:

Posted by Miglior acque at 5:18 pm No comments: