Everyday, directed by Annie Ryan and written by Michael West in collaboration with the company, is Corn Exchange's latest production. It runs in the Samuel Becket Theatre (Dublin) until 28th October. Anyone who saw their award-winning Dublin by Lamplight last year will certainly not have missed this production because they will have known to expect something special. Everyday is no exception. It is nothing short of a tour-de-force of theatre, with performances that stand out for their accomplishment and power. It follows the day in the life of a host of characters all trying their best to keep the frayed threads of their lives together. Despite the large number of characters, and the complex plots, you are immediately engrossed and completely involved. You care about each character, and find yourself laughing out loud uncontrollably one minute while the next being on the verge tears. The characters' lives interweave with great subtilty, à la Kieslowski (Trois Couleurs), almost touching each other, but with no one character having any overall sense of the big picture. And there is great playfulness too, with lots of meta-theatrical moments. One 'intertextual' moment stands out: Mark O'Halloran and Tom Murphy sit drinking cans of beer talking about their lives, how they got their girlfriends pregnant, and what they'll do next. It is a real Adam and Paul moment, full of artful resonance, clever and funny. It's a play about a changing Ireland, with Nadia, a Ukrainian immigrant working as a childminder and a waitress, dealing with the selfishness that Irish economic success has bred so virulently. Another wonderful moment, Aiden, the failed musician who cannot come to call himself an English-language teacher, introduces himself to Nadia and in a breakthrough moment, describes himself as a teacher. Her response is beautifully drawn by Louise Lewis, who you can just see reacts with a sense of respect for his profession, coming from another culture that still prizes the old-fashioned jobs. It is just one of the many very delicate moments in the play and is indicative overall of its great sensitivity and power. Go and see it.
Posted by Miglior acque at 7:47 pm No comments: 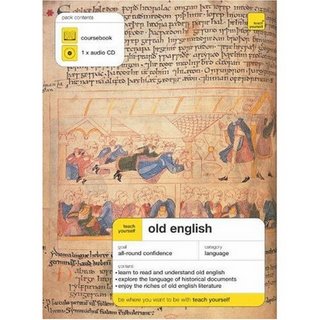 It's an enormously useful textbook and I recommend it wholeheartedly.
Posted by Miglior acque at 12:36 pm 5 comments: 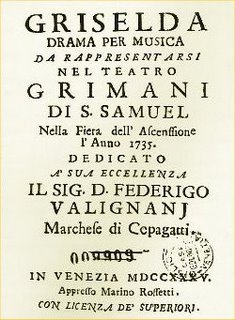 In 1735 at the Teatro S. Samuele in Venice the opera Griselda, written by Antonio Vivaldi, was first performed. This year saw the release of the Ensemble Matheus' recording of this little-known work, under the direction of Jean-Christophe Spinosi (Naïve: OP30419). Their efforts were rewarded with the prestigious Diapason d'Or and the reviews have all been glowing.

The story of Griselda has its first major outing in fourteenth-century Italy where it appears as the final story in Boccaccio's great story-collection Decameron. It became a real bestseller, however, when Francesco Petrarca translated the tale into Latin and included it into his collection of Letters of Old Ages (Res seniles), and indeed it split off from the Seniles and was copied separately and disseminated extremely widely. Chaucer encounters the story and incorporates it into his Canterbury Tales as the tale told by the Clerk of Oxenford. And the story has had a very prestigious lineage of adaptation in French from the fourteenth century onwards.

Vivaldi's Griselda, whose libretto was written by Apostolo Zeno and revised by none other than Carlo Goldoni, presents considerable differences in plotting. The most striking is exactly why Gualtiero tests his patient wife: to convince his people of her worthiness. The very opening of the opera has the people reject Griselda, while Gualtiero wants to marry her. In order to convince them of her virtues he proceeds to test her. While the plots turns a little...baroque at times, it is fascinating to think of Chaucer and his represenation of the people who follow the mercurial will of their leader, accepting the new bride-to-be with alacrious amnesia. The Clerk calls them unsad and evere untrewe, exactly the opposite of Griselda, who is sad (long ago pointed out by Brewer). This is a key theme in the tale, key virtues in medieval literature. For Vivaldi, on the other hand, Griselda's repudiation by the people is a device to introduce another suitor (Ottone) who declares his undying love for her, while the young daughter (Costanza), spirited away long before, and now recalled to 'play' bride-to-be, has her own heartbroken lover (Roberto).

You need a map to follow the rest of this so I shan't go into it here, but the music is fantastic, the recording super, the research wonderful.
Posted by Miglior acque at 11:26 am No comments:

Averroes In Our Time 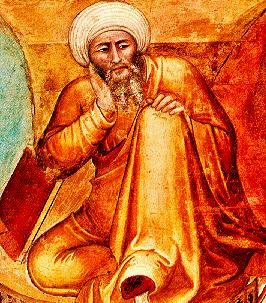 Listen to Melvyn Bragg's In Our Time on BBC Radio 4 this week discussing Averroes with Amira Benninson, Peter Adamson, and Sir Anthony Kenny.

Dante places Averroes last in a long list of pagan philosophers who are in Inferno because they could not enjoy the Christian revelation. But they are in Limbo, a strange sort of stasis without pain, a middle existence of hope without hope: 'sanza speme vivemo in disio' (Inf. 4. 42). Averroes' name appears with Aristotle's as bookends to a long catalogue of philosphers. Aristotle is the 'maestro di color che sanno', and Averroes is he 'che 'l gran comento feo', that is, he who produced the celebrated Aristotelian commentary. The influence of Averroes' thought in Duecento-Trecento Italian poetry is much debated, especially how and in exactly what way it influenced the dolce stil nuovo and in particular Guido Cavalcanti. Cavalcanti is the great unspoken character in the Commedia, once Dante's primo amico, the only trace of him appears in Inf. 10 where his father asks movingly: 'mio figlio ov'è? e perché non è teco?' (l. 60). Dante's reply has been explained in various ways, and remains ambiguous and strange: 'Da me stesso non vegno: | colui ch'attende là, per qui mi mena | forse cui Guido vostro ebbe a disdegno' (61-3).
Posted by Miglior acque at 9:30 am 2 comments: