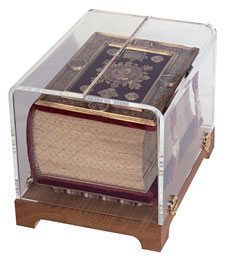 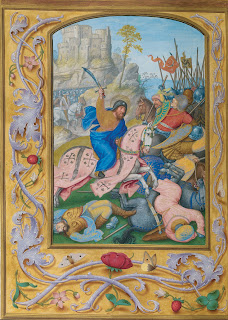 The Grimani Breviary is the most elaborate and arguably the greatest work in the history of Flemish manuscript illumination. Purchased by Cardinal Domenico Grimani by 1520 for the enormous sum of five hundred ducats, it brought together the leading illuminators of the time, including the Master of James IV of Scotland (probably Gerard Horenbout), Alexander Bening (the Master of the First Prayer Book of Maximilian?), the Master of the David Scenes in the Grimani Breviary, Simon Bening, and Gerard David. More important, each of these artists created for this manuscript some of his most exquisite and original miniatures. 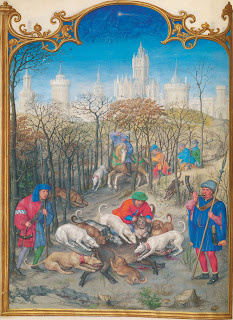 Thus Thomas Kren, Maryan W. Ainsworth and Elizabeth Morrison in their catalogue entry, No. 126 in Illuminating the Renaissance: The Triumph of Flemish Manuscript Painting in Europe (Los Angeles: J. Paul Getty Museum, 2003), pp. 420-424. One can hear the frustration in their tone when they wrote about the massive amount of work still to be done on this manuscript: 'Indeed, the two-day examination of the manuscript by Maryan W. Ainsworth and Thomas Kren proved woefully inadequate to the task of sorting out all of the stylistic and technical issues that the book raises' (p. 420), a frustration all more acute since the manuscript was not actually displayed in this exhibition. 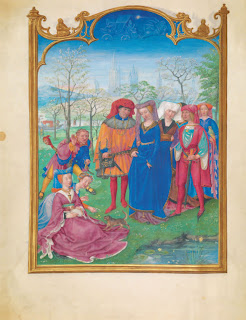 If anyone would like to buy me this facsimile for a birthday or Christmas, or Easter, or really, any other day of the week, please feel free. It is selling, apparently, for €22,000.
Posted by Miglior acque at 8:10 pm 6 comments:

Getting Medieval on the BBC

Great long silence lately on my part: apologies. I've been busy, writing like crazy, travelling, and teaching. Was in Oxford yesterday for a school's dinner with my old second years. Lovely to see them again. Lovely. They'll do well.

Picked up a couple of lovely things in Oxfam books:, but most happy with J. B. Whiting's Proverbs, Sentences, and Proverbial Phrases from English Writings mainly before 1500 (Cambridge, MA & London: Belknap Press & Oxford University Press, 1968) for a cool seven squids. Also picked up a copy of Anne Carson's Decreation and have been making my way v e r y v e r y s l o w l y t h r o u g h i t. I've been lucky to pick up a number of other things lately. For example, the second edition of Barbi's edition of the Vita Nuova (Bemporad, 1932), in super condition, from the library of an Irish priest! I also found a copy of Gombrich's Aby Warburg: An Intellectual Biography, 2nd ed. (Phaidon, 1986), which I cannot wait to get into.

Over the past while the BBC has been broadcasting lots of stuff on poetry, including medieval poetry. Michael Wood has a programme on Beowulf, and Simon Armitage has one on Sir Gawain and the Green Knight. While the first on Beowulf is quite good, though there's a bit too much lunatic fringe about it and looking meaningfully into meres and the like. But generally it was ok.

I was quite looking forward to Armitage on Gawain, thinking that he would talk about translating the text, how he went about it, what poetic challenges he faced. And there are glimmers here and there of this. But mainly it is not very good. Not very good at all in fact. He makes just a few references to the Middle English, including testing out words on local northern farmers to see if any of it sounds familiar (admitting he was disappointed he didn't find them speaking in fluent Middle English NW Midland dialect...). The rest is filmed 'on location', but based speculatively on where that location might be. There isn't a trace of a medievalist to be found. Michael Wood discussed Heaney's translation of Beowulf with the man himself. Why didn't Armitage talk to Bernard O'Donoghue about translating the poem, as a poet and a medievalist. (I'm tempted to wonder why O'Donoghue did not do the documentary himself). It was a real missed opportunity.

One worrying thing was his reference, twice, to the Green Knight picking up his head and putting it back on his shoulders. This first happens when Armitage opens the film, and then while talking to someone who'd been healed at the well of St Winefride (in Holywell), he repeats it while comparing the gesture to the miracle of the said saint, whose severed head is reattached by Saint Beuno and restored to life.

The Green Knight never replaces his head on his shoulders. What happens is far more interesting and a poet of Armitage's creativity and imagination should not be so deaf to this. The Green Knight's head is kicked about the court for a bit as his torso remains. This torso reaches down and picks up the head and opens his eyelids and speaks. When he gets back on his horse he does so continuing to hold his head in his hand. The scene is one of an extraordinarily careful management of the horror. Putting his head back on his shoulders would have been positively banal by comparison.
For þe hede in his honde he haldez vp euen,
Toward þe derrest on þe dece he dressez þe face,
And hit lyfte vp þe yȝe-lyddez and loked ful brode,
And meled þus much with his muthe, as ȝe may now here:
'Loke, Gawan, þou hatz hette in þis halle, herande þise knyȝtes;
To þe grene chapel þou chose, I charge þe, to fotte
Such a dunt as þou hatz dalt—disserued þou habbez
To be ȝederly ȝolden on Nw Ȝeres morn.
Þe knyȝt of þe grene chapel men knowen me mony;
Forþi me for to fynde if þou fraystez, faylez þou neuer.
Þerfore com, oþer recreaunt be calde þe behoues.'
With a runisch rout þe raynez he tornez,
Halled out at þe hal dor, his hed in his hande,
Þat þe fyr of þe flynt flaȝe from fole houes.
To quat kyth he becom knwe non þere,
Neuer more þen þay wyste from queþen he watz wonnen.
What þenne?
Þe kyng and Gawan þare
At þat grene þay laȝe and grenne,
Ȝet breued watz hit ful bare
A meruayl among þo menne.

He held the head up straight with his hand,
and turned the face towards the king who sat on the throne.
He raised his eyelids and stared at him open-eyed;
then with his mouth said the words you will hear.
'Be sure, Gawain, you're ready, as you have sworn
to seek conscientiously until you find me,
as you've said in this hall, in these knights' hearing.
Seek out the Green Chapel, I urge you, to get
such as blow as you have struckf. You've earned the right
to be promptly repain on New Year's morning.
Most people call me the Green Chapel Knight;
so, if you ask, you won't fail to find me.
Therefore come, or be called a defaulter.'
With a violent tug he pulled the reins round,
and galloped out the hall door, his head in his hand,
so that fire from the flint sparked off the hooves.
To what country he went no one there knew,
any more than they knew where he'd come from at first.
What next?
The king and Gawain then
laughed at this green man.
But they had to face the truth
that this was unnatural.

I should say that his translation does not make this mistake; it seems to be a kind of misremembering. I know I'm being a bit snippy about this as a mistake, and it is a mistake. But it is also interesting. It is as if Armitage wishes to make the Green Knight whole, to restore him to a fully human form as soon as possible after Gawain decapitates him. This is in such contrast with the Green Knight himself, who might be said to accentuate his non/in-human form. And this is a very important part of his character and of the story. It also feels like a kind of injustice to the violence of Gawain's act. He performs an act of great violence, described in detail: the blade shatters the bone, and goes through his neck with such force that the edge of the blade bites into the ground. This too is important.
Posted by Miglior acque at 9:48 pm 5 comments: