The Bodies of Italian Lyric 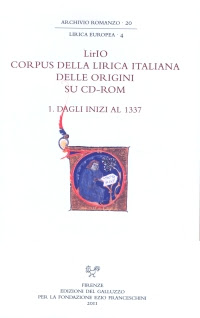 In 2011, under the direction of Lino Leonardi, the first part of a big project on the early vernacular Italian lyric was published as LirIO Corpus della lirica italiana delle origini su CD-ROM. 1. Dagli inizi al 1337 (Firenze: Edizioni del Galluzzo per la Fondazione Ezio Franchescini), in a series called Archivio Romanzo (as number 20), and Lirica europea (as number 4). It has the ISBN: 978-88-8450-415-9, and is on sale for €250. A short review will appear in the medieval studies journal Medium Ævum, but I thought it would be opportune to present the database in greater detail and discuss it in a slightly broader context. [The second part has just appeared, ‘Dagli inizi al 1400’, a cura di Lino Leonardi e di Alessio Decaria, Pär Larson, Giuseppe Marrani, Paolo Squillacioti, Archivio Romanzo, 25, ISBN: 978-88-8450-503-3. This includes everything that was in Part 1, and extends the inquiry to the year 1400. Can this means that a user must now buy a second part, which includes what s/he already has, to get from 1337 to 1400, and at a cost of €400? Surely this cannot be the case? — UPDATE: I have been informed that for those who have bought the first CD, SISMEL will reduce the cost of Vol. 2 by the cost of the first CD, meaning that for them, the second CD will cost €150]

Firstly, what is it? It is a database of the entire corpus of lyric poetry up to the year 1337, which the editors have considered is, with the death of Bindo Bonichi, the end of the ‘Dolce stil novo’. A work in prose, namely Dante’s Vita nova is included, given its influence. The idea is that it provides an extremely powerful tool for text searching, based on the best available editions. Indeed, as Leonardi says in the Preface:

[The aim was, and is, to offer a systematic repertoire of that foundational period, now opportune and necessary after the completion in the last century of the great critical editions, from the thirteenth-century corpus by Avalle to Dante’s lyric poetry by De Robertis. A repertoire that allows us to make the most of what has been gained in many in-depth analyses, forming new tools and establishing new bases for the understanding of a literary system that is at the very origins of modern European poetry.] 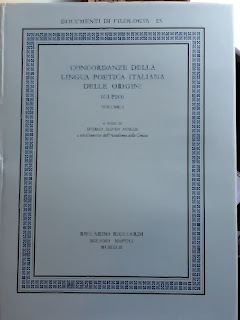 So there’s a sense here that the philological endeavours of the last century have culminated, and indeed made possible, the building of these corpora. In other words, the better the quality of what goes in, the better the quality of what comes out, ‘allowing philologists to answer better the questions they have long been asking’ (in the words of Sheldon Pollock, ‘Future Philology? The Fate of a Soft Science in a Hard World’, Critical Inquiry 35 (2009), 931-961, at p. 949 n45). An important publication preceding the appearance of LirIO is known by the acronym CLPIO, or Concordanze della lingua poetica italiana delle origini, edited by D’Arco Silvio Avalle (numbered 25 in the series ‘Documenti di Filologia’) and published by Ricciardi in 1992. It is a remarkable work, a corpus of Duecento poetry, a beautifully detailed linguistic analysis, much material on scribal practice, an incipitario, and various indices (prepared by Lino Leonardi), all comprising pp. CCLXX + 870, with the ISBN: 88-7817-900-0. It is monumental, and for me offers an interesting contrast, as an ‘end-user’, with using the CD-ROM of LirIO. I should say that I love how CLPIO is set on the page and how it has been finished. [I should also say that I have recently come into possession of my own copy, from the library of a distinguished and late-lamented palaeographer, and I’m already finding using it regularly a thoroughly thrilling experience.]

A feature of editorial activity in Italy over the past two decades (and more) has been the attention to electronic, searchable corpora, and there is no doubt that it is adding greatly to the control the reader and the specialist researcher has over the material, changing the kinds of questions it is now possible to ask, as well as improving the accuracy of the answers we get. Users of TLIO, the Tesoro della lingua italiana delle origini, which is published under the auspices of ‘L’Opera del Vocabolario Italiano’ (OVI), an institute of the ‘Consiglio Nazionale delle Ricerche’ (CNR), and based at the Accademia della Crusca, in Florence, will immediately recognize the enormous value of such material. LirIO can also to be placed into a wider context of a massive editorial effort to digitize and index the corpus of Troubadour poetry. It must also be placed in the context of the series ‘Edizione nazionale I canzonieri della lirica italiana delle Origini’ published with SISMEL, of the utmost importance in the study of the early Italian lyric. In the words of Antonelli and Rea, in a research paper entitled Il lessico delle emozioni nella lirica europea medievale e un nuovo database (available here), it is no exaggeration to state ‘che un uso sistematico dei database ora completati consentirà di riproporre in termini nuovi l’intera storia della lirica romanza, sia dal punto di vista semantico e ideologico che formale, posta anche la ricchezza dei dati che accompagnano le vere e proprie concordanze (schemi metrici, bibliografia, sviluppo cronologico delle singole forme, grafici, ecc.)’. See here for a contribution by Lino Leonardi entitled ‘Varianti, apparato, testo. La prospettiva ipertestuale delle Concordanze della lingua poetica italiana delle origini (CLPIO)’, which also provides valuable contextual material on LirIO.

So it can be stated firmly that those interested in the origins of vernacular Italian literature, and specifically its lyric poetry, now live in an era of what we could term ‘Big Data’. The subject of Big Data in Medieval Studies has received some highly stimulating commentary recently over on Bruce Holsinger’s beautiful blog Burnable Books (with a series of contributions by Martin Foys, Timothy Stinson, Bruce Holsinger, Deborah McGrady, Stephen G. Nichols, Elaine Treharne, and Alexandra Gillespie). The kinds of questions they have posed are pressing and important.

I’m not a techie, so I cannot get into the nitty gritty of back-ends and what runs the database, or XML markup and the like. The software that runs the database is called Gatto (the Italian word for cat). The software is being continually updated, which you can see on the OVI website. It is the software that runs TLIO online, but on the CD-ROM it only runs on a Windows platform. I have to say that this was rather a problem for me, as a Mac user, and I was not going to, and would not, pay the cost of another operating system on my Mac, even if with BootCamp I can run a parallel environment. It means I can only intermittently use it when I have access to a PC. I do not understand why it cannot run on a Mac, but my advice to those responsible would be to address this with the greatest of urgency. There is a larger question of future-proofing this resource. The answer lies, perhaps, in something web-based rather than on CD-ROM, which would make updates and corrections easier, and avoid platform limitations (like TLIO, for example).

The look and feel of the database is quite retro, it almost feels DOS-like, though I’m sure it’s much more up-to-date than that. I’d go as far as to say that the interface is a little forbidding, perhaps even a little severe for my taste. The user has great control over the search terms, what material is searched, and the output format for the search. It is a resource that requires lots of curiosity, but not the curiosity of a browser, but rather that of someone on the hunt for something, something specific. It does not lend itself to leafing through, since there is nothing to look at without doing a search. It is not a book and is not designed to look like one. One can of course read individual poems, but the interface is very spartan and does not encourage reading for pleasure in the way I might take down Poeti del Duecento for a few hours on a Sunday, or the way I browse CLPIO. This is not the fault of anyone, and given the extraordinary power and scope of the resource, my comments sound like cavils.

The value of this resource is clear to anyone who uses it. The kind of sensitivity to the lexicon of the early Italian lyric that is essential for any detailed critical, literary, and philological study is now immeasurably facilitated. All such studies will now be indebted to this resource, and the editors are to be congratulated on a marvellous project.

It is an immensely exciting time to be working in this field.
Posted by Miglior acque at 5:31 pm No comments: