Basically, I want this.

Giovanni Nencioni was an Italian linguistics scholar and a lexicographer. This is his study in Palazzo Barocchi, on the Arno. Photos taken from here. 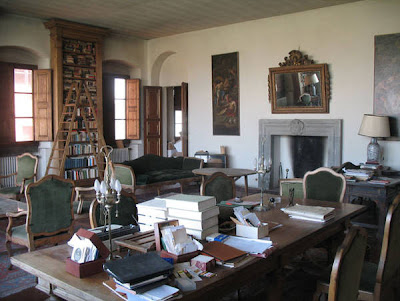 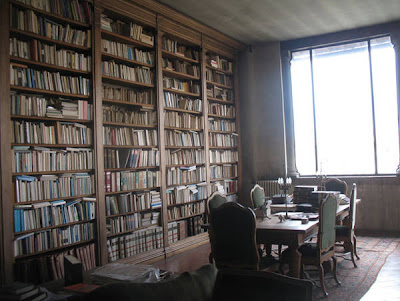 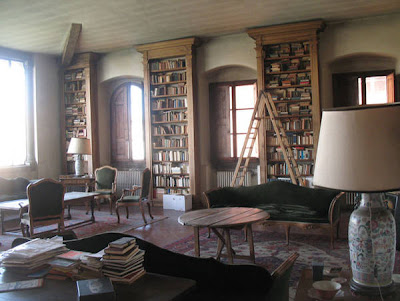 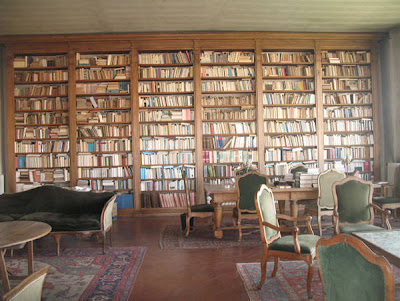 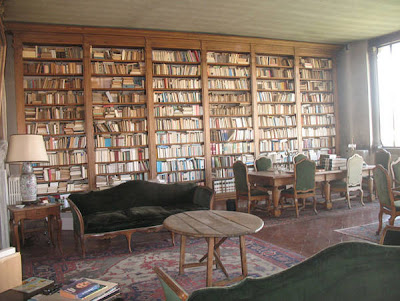 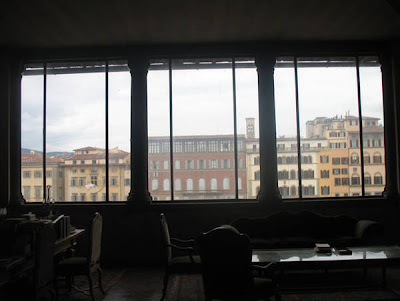 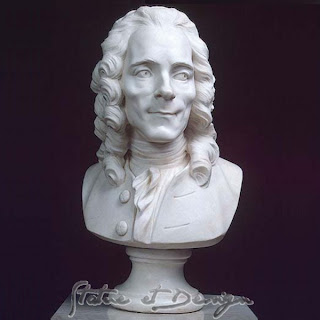 I get a word of the day from the OED via email. Today’s word was pococurante. I’d never heard it used before in English. Today I’ve decided to be pococurante (except on my bicycle on the way to the office).


pococurante, n. and adj.
Pronunciation: Brit. /ˌpəʊkəʊkjᵿˈranti/,  U.S. /ˈˌpoʊkoʊˌkjəˈrɑn(t)i/
Etymology: <  Italian poco curante caring little (early 17th cent. or earlier) <  poco poco adv. + curante, present participle of curare to care (a1294 in reflexive use; 13th cent. in sense ‘to cure’; <  classical Latin cūrāre cure v.1), probably via the name of Seigneur Pococurante, a fictional apathetic Venetian senator in Voltaire's Candide (1759).
A. n.
A careless, indifferent, or nonchalant person.
1762  L. Sterne Life Tristram Shandy VI. xx. 85 Leave we my mother—(truest of all the Poco-curante's of her sex!)—careless about it.
1779  H. Thrale Jrnl. 1 May in Thraliana (1942) I. 382 He seems to have no Affections, and that won't do with me—I feel great Discomfort in the Society of a Pococurante.
1860 Blackwood's Edinb. Mag. June 708/2, I really cannot afford to hazard my reputation as a poco-curante.
1949  V. W. von Hagen South Amer. called Them iii. xvii. 219 If the Reverend Dr. Samuel Butler could have composed a single line to describe him..he might have put: ‘rat-catcher and pococurante’.
1995 Guardian 26 May (Friday Review) 8/3 The dreamy pococurante needs to bluff his way into employment at a top National School.
B. adj.
Careless, indifferent, nonchalant.
1815  T. Moore Mem. (1853) II. 76 That idlest of all poco-curante places, Dublin.
1823  W. M. Praed Troubadour in Poet. Wks. (1844) 102 Poco-curante in all cases Of furious foes, or pretty faces.
1881 Sat. Rev. 9 July 32/1 Lord Granville's pleasant faculty of pococurante conversation.
1948  P. A. Scholes Great Dr. Burney I. xxxvii. 379 Some odd news, which illustrates, let us proudly say, not the pococurante spirit but the sangfroid of our great British nation.
1985 Pick of Punch 25/1 A gust of river wind sprayed my entire shirtfront with damp powdered sugar; I remained placidly pococurante.
Derivatives

ˌpococuˈrantish adj. careless, indifferent, or nonchalant in character.
1821 Examiner 491/1 Criticism has been a little Pococurantish of late years.
1916  G. Saintsbury Peace of Augustans (1946) v. 229 He had, when he chose not to be flighty or pococurantish, not inconsiderable common sense.
2003 Financial Times 13 Dec. (Weekend Mag.) 31 Are you quite pococurantish in the face of pressure to spend your hard-earned money on finnimbruns?

Posted by Miglior acque at 8:37 am No comments: 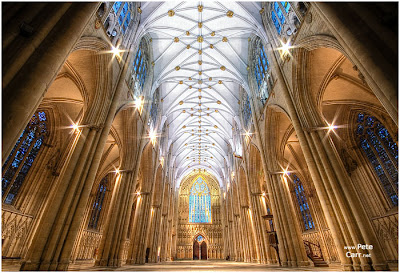 It has been the longest time since I last updated, and I’ve been the busiest little bee. The most important thing to have happened is that I’ve moved to York to take up a lectureship at the University. This has meant moving house, settling in to a new city, and settling in to a new department. It has been a very good move, though of course I miss Pembroke very much and my friends there. York is a beautiful medieval city with an imposing cathedral, the largest Gothic cathedral in northern Europe, called the Minster. It’s a gem, with extraordinary stained glass. So, the city is a great place to be a medievalist. 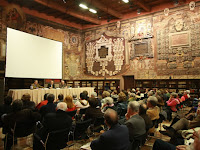 Another thing that has kept me busy was preparing for a conference in Bologna last week and that was enormous fun. It was held in the Sala dello Stabat Mater in the Archiginnasio. The programme was very full but enjoyable and it was wonderful to see friends, colleagues and maestri, old and new. The third day was held in Ravenna, which was where I gave my paper. During the lunch break we went around the corner to see the Arian Baptistry, with its rather wonderful mid-sixth century mosaic depicting the baptism of Christ. It is such an extraordinary thing to have these treasures on your doorstep, to be able to take ten paces from the office door and to be standing under this! During the conference, there was a delightful bookstall, where those giving papers could take what they wanted, for free. I began to silently hyperventilate when I realized this was the case, then proceeded to jump upon the table with my arms outstretched explaining how I needed them all. I know what you’re wondering now: what books did you get then? Well, Carlo Delcorno’s edition of Domenico Cavalca’s Vite dei santi padri for SISMEL was clearly the prize win, and I’m just delighted to have it. I also picked up a copy of Bodo Guthmüller, Mito e metamorfosi nella letteratura italiana, Fiorenzo Forti, Magnanimitade: studi su un tema dantesco. While in town, I took the opportunity for a little whizz around some of my old familiar bookshops, and found a copy of Azzurra B. Givens, La dottrina d’amore nel Boccaccio, and K. Esser, ed., Opuscula Sancti Patris Francisci Assisiensis. So delighted with those. 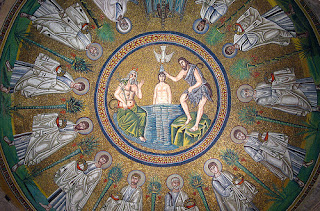 Some little while ago I blogged a photo  of the great Raimondi in his study and mentioned that his latest book, Le voci dei libri had just appeared with Il Mulino. While at the conference, I happened upon the the fact that in the bookshop Zanichelli, more or less downstairs from the Archiginnasio, they were giving away copies of Raimondi’s book. It was thus that I felt a moral obligation to read it, and did so on the journey home. It is a beautiful meditation on the books in his life, how they came into his life, who brought them. I found so moving his account of reading Being and Time in the ruins of a Bologna terribly scarred by the war, and his time at Johns Hopkins and encountering the work of Bakhtin (with a telling tiny comment on this first encounter being in the English translation of his Rabelais book, much enriched when some time later he came to read it in the far superior Italian translation [L’opera di Rabelais e la cultura popolare, Einaudi, 1979, something that is very obvious to anyone comparing both translations).

On the way home I also read the ‘Domenica’ section of Il Sole 24 Ore where Claudio Giunta talks about the teaching of Dante in schools, the new challenges for the teaching of medieval literature, how their engagement with new media, social networking, etc, affects the way that these texts are now read. I wonder what the next Raimondi will look like, and what story his or her version of Le voci dei libri will tell.