British Library, MS Cotton Nero A. x., art. 3, f. 42r.
The four poems in British Library, MS Cotton Nero A. x. art. 3 are known to students of medieval literature with the modern titles Pearl, Cleanness, Patience and Sir Gawain and the Green Knight, with the poet often referred to as the ‘Pearl Poet’ or the ‘Gawain Poet’. Much has been written about the four poems and about the manuscript, about the fascinating set of images contained therein, with much of the attention directed at the remarkable Arthurian poem Sir Gawain and the Green Knight. The beautiful poem that opens the manuscript, however, has certainly been less studied. It has also been less translated: Marie Borroff published one in 1977, Vantuono in 1983 and Casey Finch produced one in 1993. These translations are for the most part by professional academics and medievalists, while one can point to translations of Gawain by contemporary poets, such as Armitage or Merwin. This situation has now happily changed with the wonderful translation by the English poet Jane Draycott. Introduced by the medievalist and poet Bernard O’Donoghue, the short poem is rendered with a great simplicity and power. It is a dream vision in which the narrator laments the loss of his pearl, often thought to be his little daughter. During his vision he sees her across a stream and begins a dialogue with her. She explains what he sees and comforts him, clarifying what he cannot understand. The poem’s masterful control is most evident in having the narrator continue to not understand, and when he attempts to cross the stream to be with his pearl, he wakes up. Bereft. The poem is technically extraordinary: written in an alliterative meter, with 101 stanzas of 12-lines, divided into five-stanza sections. It turns on a series of what are called concatenating rhymes, where the rhyme-word ending one section will begin the next section, and where the word’s sense is stretched and elongated with dazzling dexterity.
The first stanza (ll. 1-12; f. 39r in the manuscript) amply demonstrates Jane Draycott’s skill:

One thing I know for certain: that she
was peerless, pearl who would have added
light to any prince’s life
however bright with gold. None
could touch the way she shone
in any light, so smooth, so small –
she was a jewel above all others.
So pity me the day I lost her
in this garden where she fell
beneath the grass into the earth.
I stand bereft, struck to the heart
with love and loss. My spotless pearl.

Look at the boldness of that opening line, the sense of certainty and incomprehension, the way she captures the emphasis of this first stanza, its almost hypnotic beat of statement after statement. I love the way it seems to rise and fall. I think that that ‘I dewyne, fordolked of luf-daungere’ translated as ‘I stand bereft, struck to the heart | with love and loss’ is just magnificent, where the enjambment renders the line more powerful (as O’Donoghue rightly sees in his introduction, p. 8). Great poems can make for great translations, other great poems really. Read this great translation because it is also a great poem.

Modern editions of the poem Pearl are available. The best is that of E. V. Gordon for Clarendon Press in 1953, but see too that in The Poems of the Pearl Manuscript, ed. Malcolm Andrew and Ronald Waldron, 5th ed., published with an English translation (Exeter: University of Exeter Press, 2007), the readily accessible Everyman edition, prepared by J. J. Anderson (London: J. M. Dent, 1996) and the rather more difficult to find The Pearl Poems: An Omnibus Edition, ed. William Vantuono, 2 vols (New York: Garland, 1984), the first volume of which has Pearl. On the image above see Kathleen L. Scott, Later Gothic Manuscripts, 1390-1490, 2 vols (London: Harvey Miller, 1996), Cat. 12 (Vol. 2, pp. 66-68), and see also A.S.G. Edwards in A Companion to the Gawain-Poet, ed. Derek Brewer and Jonathan Gibson (Cambridge: D.S. Brewer, 1997). A digital facsimile (badly needed) is in preparation, with details available here.
Posted by Miglior acque at 10:00 am No comments: 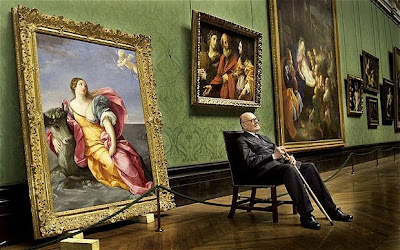 Sir Denis Mahon at the National Gallery in London. On the left is Guido Reni’s ‘Rape of Europa’, which he had bought in 1945 for 85 guineas Photo: Ian Jones

Read obits here, here, here, and read an interview here.
Posted by Miglior acque at 11:26 am No comments: