In the 1996 film Tiré à part, dir. Bernard Rapp, with Terence Stamp (speaking French quite beautifully) there is a scene in the study of one of the characters, Nicholas Fabry. It is a scene in which he is looking for something and so pulls all the books off the shelves, but the study itself is quite marvellous (and I've had occasion to refer to it before). Well, I've pulled a quick screen shot from a preview clip. It's a mess but you get the idea.

Wonderful study.
Posted by Miglior acque at 11:23 am No comments: 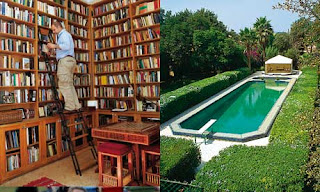 This is a picture featured in the The Observer Magazine, 25.07.10, p. 33 (Travel, 'Casablanca write large'), which shows the library of Dar Khalifa, the Caliph's House, in Casablanca, restored by its owner Tahir Shah. 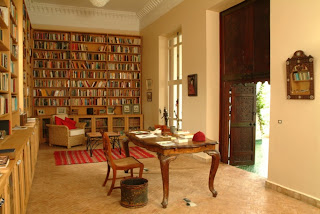 Books in Bologna - and elsewhere 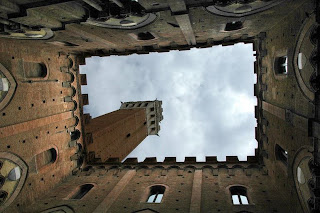 My trip to Italy for the NCS Congress in Siena has also resulted in the happy acquisition of a small but select number of books for my delectation and pleasure. This was a combination of picking up books I already knew were in certain shops and picking up some other things unexpectedly. In the former category was Giuseppe Corsi's anthology Rimatori del Trecento (UTET, 1969), an excellent selection of poetry with a hugely detailed critical apparatus. I'd been using the library copy and was using it enough to justify owning it. When I went to Libreria Belli in Bologna to pick it up I happened quite by happy accident upon the Romano and Tenenti edition of Alberti's I libri della famiglia, first published by Einaudi in their NUE series in 1969. This edition has, however, been revised by Francesco Furlan, in 1994, with a text that takes account of new manuscript evidence. It was not cheap but then again, this hardly ever appears second hand (and it is now out of print, like so many other volumes in this series). I'm very happy to own this fascinating work and will be using it more often, both for teaching and research.

I was also kindly gifted some books which I'm delighted to have. Piero Boitani's Letteratura europea e Medioevo volgare (Il Mulino, 2007); Prima lezione di letteratura (Laterza, 2007); and Sulle orme di Ulisse, rev & exp edn (Il Mulino, 2007 [1998]). Taken together these represent a significant part of the research interests of this fine medieval scholar and will be a mine of future reading and study.

At the NCS bookstand, there was a representative of Einaudi and, taking advantage of a conference discount, I decided to procure a copy of Chiara Frugoni, L'affare migliore di Enrico: Giotto e la cappella Scrovegni (Einaudi, 2008), and Maria Luisa Meneghetti, Il pubblico dei trovatori: la ricezione della poesia cortese fino al XIV secolo (Einaudi, 1992). This last I'd been long on the lookout for and was delighted to pick up, but the former got me very excited. It is a very substantial tome by a very famous historian. Then, while in Bologna, I was then able to pick up a copy of Giuseppe Basile (ed), Giotto: gli affreschi della Cappella degli Scrovegni a Padova (Skira, 2002), at Mel Bookstore. I read one alongside the other.

Frugoni's book is very interesting and very good. It is often much more the work of a historian than art historian, in the sense that her readings of the paintings are often somewhat straightforward. They are certainly always very plugged in to the source texts, and the volume includes an edition and translation of Enrico Scrovegni's will which will prove invaluable to contextualizing his much discussed motivations in building and commissioning the frescoes. But there was often room for a bit more verve in her interpretations. She is prompt in her disagreement with the work of other scholars (such as Laura Jacobus, Andrew Ladis, Anne Derbes and Mark Sandona) though does not explain the nature of these disagreements. For example, she takes issue with Jacobus's thesis of multiple entrances to the chapel, something Jacobus elaborates upon quite a bit in her exploration of different scenes being 'choreographed' for different audiences. I'd like to know why Frugoni disagrees. For all that, this is an engaging and informed study of the Scrovegni chapel and is well worth reading.

That's it for another NCS Congress. It has been an exhausting five days but they have been of great vitality and interest and immensely enjoyable. Quite apart from the wonderful setting (and the new building in which the conference itself took place was gratefully equipped with air-conditioning), the meeting this time was in great form. I met lots of people, made new friends and caught up with old friends. We were fed and watered with care and attention. The conference dinner, at the Tenuta di Monaciano was one of the best I've ever had, in an exquisite setting. The company was delightful.
At the end of the Congress several scholars who are not Chaucerians gave a perspective on their own experiences attending: it was interesting to hear this, especially as three were from modern language departments. I wouldn't have minded a few Chaucerians talking about their own conference highlights, but this did not happen at this forum. It was the end of the conference and everyone was tired, perhaps talked out. I humbly offer some of my own initial thoughts. While there were Chaucer and Italy threads at the conference, I did think that Chaucer and Italy was not quite as well represented as it could have been, in terms of sessions and how they were scheduled and put together. For example, there was a session called 'The French of Italy', lovely. Why not the vernaculars of Italy? Looking at Tuscan dialects, Genoese, Milanese? (Joseph Grossi gave a paper in my own session on L'Anonimo Genovese, complete with very successful readings in dialect!). This was a missed opportunity, I felt. And I recognize that the opportunity is now passed, and there not much point in complaining now.
There was too the egregious absence of the man of grete auctoritee, the one who has done so much for Chaucer and Italy, who did not have that far to travel. That needs explaining.
There were some rather excellent papers. These included those in the session 'Image Trouble, 1380-1538: The Secular Image': Alastair Minnis, 'Image Trouble in Vernacular Commentary: The Glossing of Evrart de Conty and Francesco da Barberino', Kathryn Starkey, 'An Iconography of the Secular in Der Welscher Gast', and Barbara Newman, 'René of Anjou and the Heart's Two Quests'. I really enjoyed the papers in the 'Italian Encounters' session, Nick Havely, 'An English Reader of Dante in Papal Avignon' [sic Adam Easton], William Robins, 'Did Chaucer Meet Sercambi', and Carolyn Collette, 'Richard de Bury, Petrarch, and Avignon'. Robins argued that Chaucer might well have visited Lucca (and therefore possibly come into contact with Sercambi, and that the exchange might not have been all one way). He did so by outlining the travel itineraries possible in late fourteenth-century Italy while also recognizing the speculative nature of his paper. It was, for all that, a fascinating paper. There were some other good sessions on MSS, Michael Hanly on Jacopo Rapondi of Lucca, for example. And a good session on humanism and the House of Fame. There were some excellent papers in a session on the French of Italy (especially a beautifully detailed and linguistically sensitive paper by Charmaine Lee), and it was an important opportunity to think about just how linguistically complex the scene is for Chaucer in Italy. Other highlights included Glenn Burger's paper on performative reading and manuscript studies, and Martha Rust on paper and parchment and the Middle English verse love epistle, a beautiful piece of work. The plenaries were powerful, chief among them Aranye Fradenburg's. Moving, compelling, enjoyable. And it was great to see Griselda stepping out in style with Richard Firth Green.
But the highlight of the conference, and certainly among the conference's most important papers, was one that was never mentioned again. This is most curious considering how much time we spent talking about manuscripts, theorizing about manuscripts, salivating over manuscript illuminations. Estelle Stubbs gave a paper on the morning of the first day in which she identified the famous 'Scribe D' as John Marchant. The importance of this scribe in copying work by Chaucer has always been recognized, but his identification now allows us to place this copying in a much more specific context (and Stubbs threw the Guildhall into relief in this respect). It was a groundbreaking piece of work, compellingly and elegantly presented, and should have been the talk of the conference.
It was an enormously successful conference.
Posted by Miglior acque at 8:32 am 4 comments: