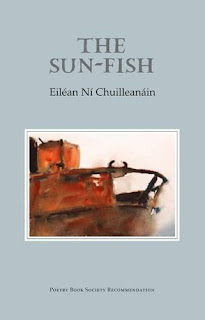 The Irish poet Eiléan Ní Chuilleanáin has won the prestigious Griffin Prize for her wonderful collection The Sun-Fish (Gallery Press, 2009). The judges' citation reads as follows:


“This beguiling poet opens many doors onto multiple worlds. From the outset, with the startling imagery of ‘The Witch in the Wardrobe’ – a ‘fluent pantry’, where ‘the silk scarves came flying at her face like a car wash’ – we are in a shifting realm, both real and otherworldly. The effect of her impressionistic style is like watching a photograph as it develops. The Sun-fish contains approaches to family and political history, thwarted pilgrimages in which Ní Chuilleanáin poses many questions – not always directly – and often chooses to leave the questions themselves unresolved, allowing them to resonate meaningfully past the actual poem’s end. She is a truly imaginative poet, whose imagination is authoritative and transformative. She leads us into altered or emptied landscapes, such as that in ‘The Polio Epidemic,’ when children were kept indoors, but the poet escapes on a bicycle ‘I sliced through miles of air/free as a plague angel descending/On places buses went …’ Each poem is a world complete, and often they move between worlds, as in the beautiful ‘A Bridge between Two Counties.’ These are potent poems, with dense, captivating sound and a certain magic that proves not only to be believable but necessary, in fact, to our understanding of the world around us.”

One of my favourite poems from this collection is entitled 'The Cure', and I think that it embodies so many of the qualities that I admire in Ní Chuilleanáin's work, the quietness of it, the tender observation that is never patronizing and the great sense of strangeness. There's also a very delicate kind of 'Irish' feel to it that I have trouble explaining: it is a tone that seems to characterize but at the same time to disappear before your very eyes.

They've kept the servant sitting up;
It's late again,
Their fire burning so high they've opened a door,
And from her room

She hears them settling the great questions:
How treat a case
Of green-sickness or, again, one of unrequited love?
The fire burns down,

They close the door. She was writing to her mother,
Resumes: Don't think
Of consulting that fraudulent woman. Her sister, who
Died, had the gift.

... I understand, it must be hard for her,
So long, no news,
But surely, secretly it comforts her heart
That the child thrives.

The voices boom again, the door is wide,
She hears the bell,
Appears with her candlestick, ready to guide
A guest to bed,

Then back to her letter. The lady of this house
Keeps to her room.
The master sighs as he locks the heavy street door.
There is no cure.

Posted by Miglior acque at 4:50 pm No comments:

This is how they all (should) do it!

Needless to say, I'm very excited about this.

For a little taster, listen to this: