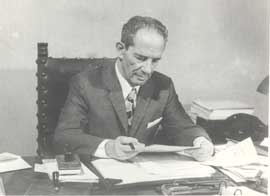 In 1944 the idea for a new encyclopedia on Dante was suggested by Umberto Bosco (1900-1987). This was designed to replace the Scartazzini 3-volume Hoepli encyclopedia published between 1896-1905. The new encyclopedia actually only took shape during the 1965 celebrations for the 700th anniversary of the Poeta's birth. In 1970 the first volume appeared from Treccani in Rome, and by 1976 the fifth and final volume of lemmata had appeared. A sixth volume appeared the following year, and contained an appendix of texts and illustrations. Thus was completed a monument of Dante scholarship. Whatever is missing from this encyclopedia is simply not worth knowing. In 1984 a 2nd edition was printed, though the revision appears to be mainly an updated bibliography rather than any alterations to the individual entries. Italian publishers are very good at producing luxury books. Think of Vallecchi, for example. So too Treccani reissued the Enciclopedia dantesca in 1996 in a beautiful deluxe edition. This edition, now out of print, was issued in 2500 copies in full leather and just exquisitely produced. The boards are lined with silk and each volume is individually boxed in leather, silk and suede.

Lately I managed to acquire a copy of the ED. It sits now by my desk and is consulted about five times a day, and that's when I'm not working on Dante. Because Dante's poem is encyclopedic, the encyclopedia is...well...even more encyclopedic. Quid dicam?

For scholars who don't read Italian there is the Dante Encyclopedia, ed. by Richard Lansing (New York: Garland, 2000). I've used it and found it very good, especially for taking account of more recent approaches and bibliography. It does not pretend to replace the ED, and a single volume of 1,000 pages could not possibly do so. But just as the ED was put together by the great Dante scholars of the time, so too does the Dante Encyclopedia comprise entries by the big Dante scholars around at the moment.
Posted by Miglior acque at 11:29 pm

The cyberbreeze that dropped me here was my google: "where to buy enciclopedia dantesca."

Which somehow I must have. Here.
I should have bought that set on the market in 2006 for $1000.
(I have in fact had the ED on these shelves of mine, checked out, remarkably enough, from the Georgia State University Library.)

We seem to have much in common, miglior acque.
Everywhere I go in your blog the more apparent this becomes.
The eight minutes and forty-five seconds of the recitation to improvisation by the Durians, jazz improvisations to readings by me of my poems, the 8:45 piece in question, which I consider our masterpiece, being "Miglior Acque."

I am thirty years your senior, miglior, yet there's this plethora of resonances.

Our passion for the Poet, most germanely. I embarked on a rhymed conversational=English (I'm dreaming, of course) translation of the Commedia in 2000. This very morning I thought that, after some 15 months, I'd changed the last word to Inferno 15. Alas, not so, once again not so. (You know that Graves poem where the blood gushes from his nails and he's posturing "Oh, When can I give over?")

What credentials I have:
I am a poet. (One book, 1983) I was a classics major. (still can't sightread) I acquired fluent Portuguese in Brazil as a boy. I am a lexicophile to the max.
To say the Commedia infinitely astonishes amounts, as far as I'm concerned, to laconicism.

(Digression: I teach urban teenagers American Literature at what a quick consult of my Chambers 10th tells me I should refer to as a publicly funded school. I fairly gloried in calling attention to the recent meaning of "crunk," which I had looked up in my just-acquired Shorter Oxford (what satisfaction, despite--remind me to tell you about boterol--being the active possessor of the 1933 OED volumes and the OED 2nd Edition on disk--to afford and land this lovely lexical lacuna--so I'm showing off my prize to a class (I have around ninety students)and pointing out that the noun form of crunk is labeled E21, whereas the original, adjectival is followed by L20, my question of the number of years in which the new usage could have emerged being met with silence, 100 years? etc., and finally, such relief, "eight")

I fear I am being quite tedious.

When I set to work, I felt a Commedia concordance was the tool I needed most, and I ended up making one (the software of Rob Watt, of the University of Dundee, M Litt (Oxford)), the HTML version of which I put on my website and which today is one of the ten Dante Society of America resource links--I keep waiting for a MISTAKE, but once got an emailed thank you from Robin Kirkpatrick , who said that my concordance had been useful as he completed his translation of the Divine Comedy (my reply, to my chagrin, bounced) (synchronistically (and Sting was at the same July 2 2000 Palio as I was,which couldn't possibly be irrelevant), I responded with a single ordering click to Amazon's email about the sudden availability of the Kirkpatrick Paradiso about two hours ago now) I'm liking his translation quite a lot. Seems to be a lot of same-wavelength choices ("Sir" for Brunetto, to name but one). Still, the Hollanders rock and rule.

The building of a Dante library was the second most important thing to do. I lust for the Prue Shaw Monarchia CD-ROM, which seems from the TLS account such a model of how it should be done (*** I have, yes, managed a Volume II of Kenelm and Foster's Dante's Lyric Poetry,*** but photocopied most of Volume 1 (as well as much of Contini). If I weren't so old I would have translated the Vita Nuova and the Rime first. I did spend quite a while on one canzone.

Now I know I'm being tedious.

Pretend my only comment was "How can I, ME, come into the essentialness of the ED?" and that you feel strangely moved to reply with everything you know that could possibly get me there.

This thing's not on, is it?

Thanks for this wonderful post. It is good to know you are out there. Robin Kirkpatrick's new translation is indeed a wonder and I am making my way through it with great delight. He is a good man. The Durling translation is highly thought of here and despite us all waiting breathlessly until 2010 for volume 3, it is a fine fine translation. One does not actually see the Hollanders' translation here much. I've only looked briefly at their Paradiso and I was left a little cold.

Letting a set of ED go for $1000 was unfortunate. If you go to maremagnum.com and do a search for "Enciclopedia Dantesca" in the search line you'll find a copy of the 1996 deluxe edition for €1000 ($1500 approx). By no means cheap. There's another copy, this time on Abebooks.com, available for about the same listed from Franco A. Volta in Rome. I don't think that any of these are what I might term 'bargains', but if you hold out you might well see more appear. They do come up here and there. Do post again when you take the plunge!

Surely the TLS is not waiting to review the Hollanders' Paradiso until Durling/Martinez complete their (excellent) work.

Just encountered on Google Books, and downloaded, a translation by one C. B.Cayley of the Comedy (The Vision of Hell, in the original ternary rhyme), London, 1851).
He, as does Longfellow 12 years later, takes Guizzante to be Cadsand, not Wissant. After more than a year of licking my little cub, Inferno 15, clean, I froze the code and recorded the canto, tonight. It finally reads and sounds good enough to stop pondering the alteration of either. btw, in my recording I pronounce Wissant "WESson" and Bruges "BREW jiz," as I believe once, across the Channel, their names were spoken. It only recently hit me that Guizzante does not sound or look like Wissant--and I should look for an equivalent foreignism.

BUT THANK YOU FOR THE ED TIP. Perhaps I can create a consortium, a la a violinist's Strad. But, are they, Ariel, safe? is what leaps to mind. Is, miglior acque, the 1996 the spit of the 1977 six volumes? Not so much as a comma betid?

Would that I could ever meet those books.

btw, your "not worth knowing" is surely a Benjamin Jowett allusion?

That I am arithmetically challenged is exposed. 1867 minus 1851 is, upon maturer reflection, 16.

Well, I think that the only difference between them is an updated bibliography which is at the end of vol 6, if I'm not mistaken (it's not to hand right now). So page numbers are identical etc. I don't think that they changed any of the entries, so I shouldn't hesitate to get the 1970-6 edition at all.
The "not worth knowing" is, eh, me. I wasn't citing Jowett actually.
Buon lavoro!

Thanks for the link to Maremagnum.com. I was able to find a copy of the 2nd printing for just over $1000 including air shipping from Italy to the US.

Great, thanks Tom for the post. That's a good price, and you won't regret it. Thanks for reading. M-A.