Notes on a Scandal, and some Watches

This video has recently been released by Vedomosti, a Russian business daily newspaper. These are extraordinary timepieces, pieces of art really. I realize that only a tiny number of people will ever be able to enjoy them and those people will have to be very wealthy. Money often comes at a price, I know this too. But while the owners may not be good people, the watches are amazing. The most expensive is that belonging to Vladimir Resin, the deputy mayor of Moscow, who wears a DeWitt La Pressy Grande Complication. Medvedev is wearing a Breguet Classique Moon Phase; the Chechen president Ramzan Kadyrov wears a Bovet Fleurier Minute Repeater. Valentina Matviyenko, the governor of St Petersburg, wears a Harry Winston Avenue Captive (worth about $26,000 while declaring an income of $58,777!). There's a good showing of Ulysse Nardin, Breguet and Patek Philippe. Interesting too is the absence of certain brands: delighted, for example, to see no JLC. With the exception of the Breguet Classique and perhaps the Patek Annual Calendar, which are both very classy watches I will admit, the others are all bling and no watch!
Posted by Miglior acque at 10:20 pm No comments:

ERROR: Aspects and Approaches
An international Conference at the University of Oxford, April 16-17 2010

This conference is aimed at early career scholars and graduate students. A volume of proceedings comprising selected papers will appear in the Medium Ævum Monographs Series. Contributions are welcomed from diverse fields of research such as history of art and architecture, history, theology, philosophy, anthropology, literature and history of ideas.

Papers will be 20 minutes or less. Please email 250-word abstracts (text only, no attachments please) to oxgradconf@gmail.com by 5th January 2010.


The conference fee is expected to be in the region of £25 (twenty-five pounds). We hope to organize a conference banquet in Lincoln's lovely hall on the Friday night and will provide details of this as soon as they are available. All updates and further information can be obtained from www.medieval.ox.ac.uk/omgc.html
Posted by Miglior acque at 10:12 pm No comments:

The return to Cambridge this term began with a quick visit to the local bookseller: joy. Part of the library of a distinguished bibliographer in early Italian print culture had become available and I picked up a few marvellous things. Mainly stuff I've used and wanted, and I had to leave a few things behind too. Very pleased with Franca Brambilla Ageno, L'edizione critica dei testi volgari, Medioevo e umanesimo, 22, 2nd rev & exp edn (Padova: Antenore, 1984); Nicolas Barker, (ed), A Potencie of Life: Books in Society: The Clark Lectures, 1986-1987, British Library Studies in the History of the Book (London: British Library, 1993); Michele Barbi, La nuova filologia e l'edizione dei nostri scrittori da Dante al Manzoni (Firenze: G.C. Sansoni editore, 1938, 2nd ed. 1962); Alfredo Stussi, Introduzione agli studi di filologia italiana, Manuali: Filologia e critica letteraria, (Bologna: Il Mulino, 1994); Ezio Raimondi, Tecniche della critica letteraria, Piccola biblioteca Einaudi, 440, (Torino: G. Einaudi, 1983); Ezio Raimondi, La dissimulazione romanzesca: antropologia manzoniana, Intersezioni, 72 (Bologna: Mulino, 1990); Guglielmo Cavallo and Roger Chartier (eds), Storia della lettura nel mondo occidentale (Roma: Laterza, 1995); Arrigo Castellani, (ed), Nuovi testi fiorentini del Dugento, 2 vols (Firenze: Sansoni, 1952 - can't believe I found this) and Corinna Salvadori, Yeats and Castiglione: Poet and Courtier (Dublin: A. Figgis, 1965 - delighted to have this). However it is H. Wayne Storey, Transcription and Visual Poetics in the Early Italian Lyric, Garland Reference Library of the Humanities, v. 1753 / Garland Studies in Medieval Literature, v. 7, (New York: Garland Pub, 1993) that I am really pleased to have found since I was about to order it from the States.
This is an important and interesting book about the early lyric anthologies and the hermeneutics of scribal/authorial compilatio. As the author says in his introduction, 'The proposal is a simple one: that some early Italian poets composed their lyrics with an eye to the manuscript forms in which their poems would be copied and circulated' (p. xxi). The following is what one might call a 'brief notice': the book is in two parts, the first deals with 'Pre-Petrarchan Experiments in Written Poets', comprising four chapters. The first, 'From the Margins: Origins and Theory of Appropriating Official Space', second, 'Transferring Visual Ambiguity: Semantic-Visual Orientations of a Medieval Text', third, 'The Editorial Redefinition of Margins: The Memoriali bolognesi and the Literary Culture of Chigiano L. VIII. 305', and fourth, 'Guittone's Last Booklet: The Visual-Semantic Orientation of the Trattato d'amore'. The second part of the book concentrates on 'the visual poetics of Petrarch's Rerum Vulgarium Fragmenta' in three chapters: first, 'Petrarch's Concepts of Text and Textual Reform', second, 'Rerum Vulgarium Fragmenta: Manuscripts and Scribal Forms', and third, 'Organizing Strategies: Aperture and Closure in Petrarch's Fragmenta'. It is an excellent book and well worth reading.
Posted by Miglior acque at 9:11 am No comments: 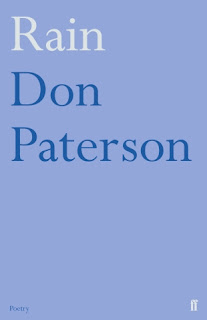 His work is characterized by a great formality that never makes its presence over-felt in the line, coupled with a simplicity and directness of imagery that will leave you stunned in its wake. This collection is marked by an elegy for the poet Michael Donaghy. This seven-part sequence entitled 'Phantom' sits alongside the other long poem, the utterly wonderful and magical 'Song for Natalie 'Tusja' Beridze'. I've read criticism that this threatens to unbalance the collection but considering that he was closely associated with Paterson in their muscial group 'Lammas' I think that it is entirely appropriate. I read the two side by side actually, one informing the other.

The first poem in the collection is called

One morning, Don Miguel got out of bed
with one idea rooted in his head:
to graft his orange to his lemon tree.
It took him the whole day to work them free,
lay open their sides, and lash them tight.
For twelve months, from the shame or from the fright
they put forth nothing; but one day there appeared
two lights in the dark leaves. Over the years
the limbs would get themselves so tangled up
each bough looked like it gave a double crop,
and not one kid in the village didn't know
the magic tree in Miguel's patio.

The man who bought the house had had no dream
so who can say what dark malicious whim
led him to take his axe and split the bole
along its fused seam, then dig two holes.
And no, they did not die from solitude;
nor did their branches bear a sterile fruit;
nor did their unhealed flanks weep every spring
for those four yards that lost them everything,
as each strained on its shackled root to face
the other's empty, intricate embrace.
They were trees, and trees don't weep or ache or shout.
And trees are all this poem is about.

There's so much to say about this poem, about the work of poetry, about what poetry should do and what poetry actually does and that mysterious and vast space in between. These poems explore this space with a deftness and a great sureness.

This is a beautiful collection from a great writer.
Posted by Miglior acque at 8:06 pm No comments:

Miglior acque has been on holiday and before that working on the book. He's been reading nice books too, some of which he'll blog on soon. Top of the list is the wonderful new Hilary Mantel novel Wolf Hall, which has been shortlisted for the Booker. It tells the story of Thomas Cromwell from his origins up to July 1535: it is beautifully written. Also read was Stieg Larsson's Girl with the Dragon Tattoo, the first in the Millennium Trilogy, good stuff and looking forward to reading the rest of them. Peter S. Hawkins, Undiscovered Country: Imagining the World to Come (Church Publishing Inc, 2009) is a beautiful meditation on the afterlife read alongside the Commedia. Valentin Groebner's Defaced: The Visual Culture of Violence in the Late Middle Ages (NY: Zone Books, 2004) is an excellent essay on violence and its representation in the middle ages (going to read Susan Sontag's Regarding the Pain of Others on the plane this afternoon - heading back to Cambridge now).

Have been thinking of investing in Alberto Asor Rosa (dir.), Letteratura italiana, 18 vols (Einaudi, 1982-1996): I've been using it a good bit lately and think it would be great to have to hand. Am I crazy? The postage from Italy is a scandal (literally).