Just say No, or On Being «colui che fece il gran rifiuto» 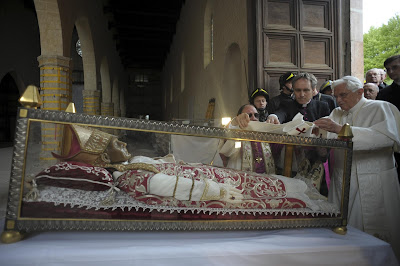 It is fair to say that most Catholics did not see this one coming. Benedict, it is true, had said in an interview with Peter Seewald that he could foresee circumstances in which a resignation was possible. But most people thought this would happen when the signs of old age and illness were much more visible. After all, the final years of John Paul II’s papacy were marked by severely debilitating illness. He cannot have been able to manage effectively in such a state.

The resignation of Pope Benedict XVI has led many to consider the rarity of precedents. The last time a pope abdicated was in an attempt to heal the schism in the Church, during the Council of Constance in 1415. The Council is not principally remembered as the stage for Gregory XII’s abdication (and resignations were not at all common in the Middle Ages). Instead, it is remembered as the first time voting took place along national blocks, in which some see a nascent ‘nation-state’ identity emerging. The strategy of resigning was successful. A single successor was elected, a Colonna who took the name Martin V, and, importantly, was universally recognized as pontiff.

The time before that was an interesting case, both for the character involved, the way he was elected, and the consequences of his abdication. With the benefit of hindsight, commentators now see Benedict’s two visits to the tomb of Celestine V in L’Aquila as significant. The picture above shows the pontiff in a gesture that was surely important: he lays his pallium on the tomb. The pallium is the symbol of papal power (the plenitudo pontificalis officii). Indeed, Benedict himself was responsible for changing the form of the pallium in 2008, so he intimately knew its significance and the power and tradition it represented. Taking it off in such a dramatic gesture was the intellectual, scholarly Benedict’s version of a press release. 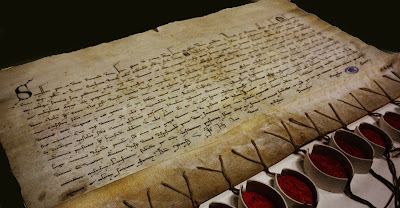 Pietro da Morrone was a hermit, holy and fastidious in his asceticism, and a founder of a new order (named after him, the Celestines) under the Benedictine Rule. His election to the See was about as unlikely as one could imagine. It probably felt that way to his electors, too. Celestine V was the last pope elevated in a non-conclave election. Rival factions had created a stalemate and after two years an outcome was looking impossible. In desperation, the sick and dying Latino Malabranca, cardinal-nephew of Nicholas III, cried out that he elected Pietro da Morrone as pope. Since it meant no-one got their way, all agreed. There are accounts of Pietro being particularly reluctant, and effectively being forced to accept the throne. It was a disastrous papacy, he had no political or administrative experience, and was caught in a power struggle he barely understood. Fortunately, Cardinal Benedetto Caetani was on hand to offer advice. 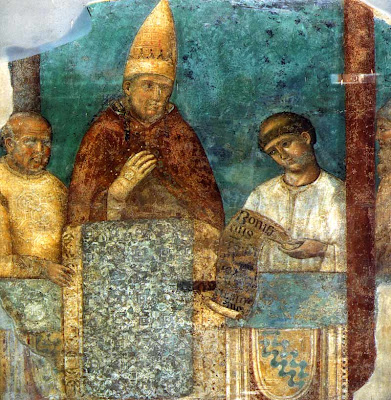 Celestine promptly issued a decree making it possible to resign, and he then...resigned. Benedict was elected his successor, took the name Boniface VIII. He was an immensely powerful and intelligent man. Knowing that the transition to a new papacy is delicate at the best of times, but would be much more complicated with a living pontiff emeritus, Boniface had Celestine captured and imprisoned, where he eventually died. This led to allegations of murder.

Many people have referred to Dante in the commentary on Benedict XVI and Celestine V, and it might be an idea to return briefly to the figure of Celestine in the Comedìa. Not least because this event is now something we share with Dante, who saw a papal abdication in his own lifetime.

Just as Dante enters Hell, he sees for the first time those souls suffering in eternal damnation. The canto opens with dramatic and violent descriptions,

Then he sees those angels who were neither rebellious nor faithful to God, but ‘per sé fuoro’. They are neither one nor the other, in a curious outside or not fully committed status, not standing for anything. Indeed, the canto is full of reserve when it comes to Dante engaging with those he meets. Apart from Caron, that is, those pertinent to the structure of the canto and its narrative architecture, nobody is actually named in this canto. They are not worth naming, ‘non ragioniam di lor, ma guarda e passa’, says Virgil. While watching this group following a flag (the contrappasso is that they must follow a flag they would never have cared about in life), Dante recognizes someone.

Dante lexically inflected this passage with unusual and rare words, indicating how important it was. The expression ‘vidi e conobbi’ is unique in the Comedìa: it says the same thing twice, reinforcing the fame of this figure, and his recognizability. The lines are powerful because Dante pointedly does not name the figure he meets, but at the same time Dante is sure it is him and recognizes him immediately. Attributing ‘viltade’, cowardice, to him is another strong move: it is precisely the accusation levelled against Dante himself in Inf II 45 (‘l’anima tua è da viltade offesa’), and the opening lines of canto III has Virgil urge Dante on his journey with the words: ‘Qui si convien lasciare ogne sospetto; | ogne viltà convien che qui sia morta’ (ll. 14–15). The word viltade, then, means here cowardice or spinelessness. It is what you shouldn’t have, especially when you’re doing something important. The word ‘rifiuto’ is also quite rare in the Comedìa: it appears only once in the Inferno, and as a verb appears three more times in the Purgatorio (I 72; VI 133; XXIV 114). As a noun, which it is here, it occurs just once, and its rhyme position draws even more attention to its unusualness. The earliest readers of these lines identified this figure with Pope Celestine V, as does the rubric to the canto, rubrics which appear in the earliest and most authoritative manuscripts (Dante was not, however, responsible for them, according to Petrocchi). Curiously, not many illustrations go in for representing Celestine as the figure in question [see Brieger in Vol. 1, p. 120]. An exception is Florence, Biblioteca Medicea Laurenziana, MS Plut. 40, 7, f. 6r, where a pope is shown holding the banner, in a full frontal pose, completely nude. The manuscript is late fourteenth-century, and probably Florentine. (Brieger and Meiss describe these drawings as ‘passable’ [Vol. 1, p. 231]; on the MS see Roddewig, cat. no. 99, and Marisa Boschi Rotiroti, Codicologia trecentesca della Commedia, pp. 116–7, cat. 62, and p. 177, tav. 8, for an illustration of f. 108v). See Anna Maria Chiavacci Leonardi’s note on Vol. 1, p. 99, for a good summary of the issue and some bibliography.

In Inf XXVII, Guido da Montefeltro, guilty of fraudulent counsel, recalls the words of Boniface VIII, who refers to the two keys of St Peter, ‘che ’l mio antecessor non ebbe care’ (and the word antecessor is a hapax here). This is surely intended to drip with irony. Dante saw Boniface as a disaster for the papacy and for Christianity. For Dante, Celestine’s gran rifiuto paved the way for Boniface, and that is his real fault.

As the Conclave is about to be called, the importance of its decision is indeed onerous. Given the unique status of this Conclave, one idea might be to elect from outside the ranks of cardinals. I can think of some eminently suitable candidates: Archbishop Diarmuid Martin, for example. But I suspect that no such thing will happen. Whoever it will be, it is unlikely he will need to imprison the pontiff emeritus, though a living antecessor is indeed a hapax. 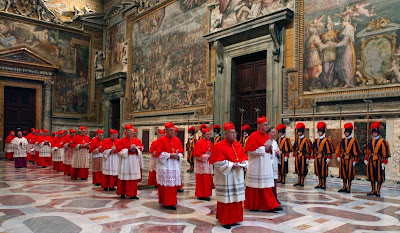 Posted by Miglior acque at 6:52 pm No comments: