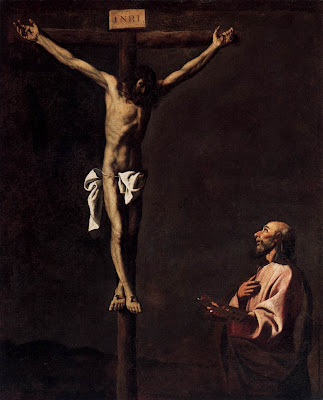 This beautiful exhibition traces a very interesting interaction in seventeenth-century Spanish art between sculptors, who carved and then prepared their work with white gesso, and painters, who finished the work, delicately layering it with flesh tones of remarkable verisimilitude (a process known as encarnación). Many of these wooden pieces remain relatively unknown outside of Spain and indeed many remain outside the purview of standard histories of art. This is because they are not works of art at all, but rather objects of devotion still in use. But as the curator of the exhibition, Zavier Bray, clearly shows, they are of an extremely high artistic quality. What he also notes is the influence of these sculptures on artists. In the example of Valázquez's 'Christ after the Flagellation contemplated by the Christian Soul' (probl. 1628-9), he notes that the little boy, representing the soul, is being invited by the angel to look at Christ's back. This was a space in some sculptural pieces that was reserved for particularly bloody and gruesome attention and Velázquez's experience as a painter of such figures of Christ would have easily given him an insight into such compositions.

There is something very remarkable about many of these pieces and it is hard to remain unmoved by them. Particularly powerful is the 'Sala de Profundis', Room 6, which has a few benches by the walls and a single image, Zurbarán's 'Saint Serapion', 1628. It hung in the mortuary chapel of the Mercedarian monastery in Seville. The space is quiet and sad. The piece is understated. It will remain with me for some time.

Go to see this exhibition. 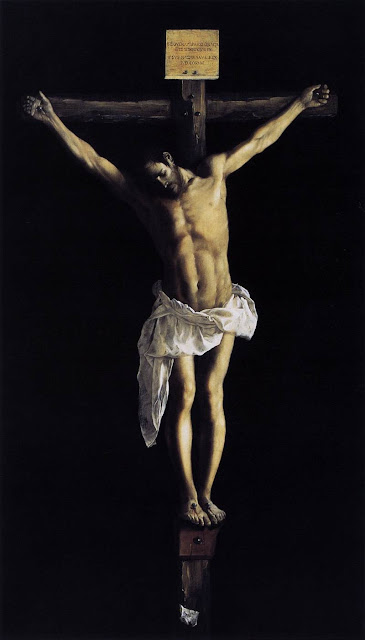 Cambridge University Library is offering students the chance to win £500 by building their own book collections.

The Rose Book-Collecting Prize was endowed in 2006 and is believed to be the first of its kind offered by any European university. As well as the £500 prize money, the winner will be offered 10 years’ free membership of the Friends of Cambridge University Library.

The contest is open to all current undergraduate and graduate students of the University registered for a Cambridge degree. To enter, students should submit a list of their collection together with a short essay, explaining the theme and significance of the collection, by the first day of the Lent full term. Shortlisted candidates will be invited to talk about their collection to the judges.

The judges will make their decision based on the intelligence and originality of the collection, its coherence as a collection, as well as the thought, creativity and persistence demonstrated by the collector and the condition of the books. The value of the collections will not be a factor in determining the winning entry – a coherent collection of paperbacks is a perfectly valid entry. Previous shortlisted entries include ‘Collecting the Gothic’, ‘Missionary travels in the South Seas’, ‘The handwritten record: manuscripts and annotated books’, and ‘German and Austrian travel and first hand experience in Asiatic dominions of the Ottoman Empire, 1871–1918’. In 2009, the prize was won by Boris Jardine (Trinity Hall) for his collection ‘Modernism in print’. For examples of winning topics at other universities, see winning collections.

The prize will be awarded in the Easter Term. It has been funded by Professor James Marrow and Dr Emily Rose in honour of Dr Rose’s parents, Daniel and Joanna Rose.

Professor Marrow said: “By establishing a prize through the UL, we want to stress and call attention to the importance of a great central library, which is the focus of the research activities of the university, and which serves a much wider range of purposes than the college libraries.

“Book collecting brings people together and we hope that a prize administered through the UL will help collectors from different colleges in Cambridge to meet one another and enjoy the company of an enlarged group of similarly-minded individuals.”

Book collecting prizes are fairly common in North American universities. Started by Swarthmore College, Pennsylvania, in the 1920s, these contests have encouraged generations of young collectors to become booksellers, librarians, and accomplished bibliophiles.