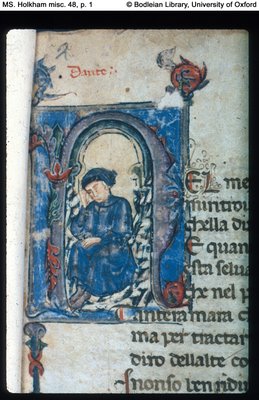 M.L. West, in his Textual Criticism and Editorial Technique, applicable to Greek and Latin Texts (Stuttgart: Teubner, 1973), tells the story of Eduard Fraenkel's traumatic experience as a young student with Friedrich Leo:
"I had by then read the greater part of Aristophanes, and I began to rave about it to Leo, and to wax eloquent on the magic of his poetry, the beauty of the choral odes, and so on and so forth. Leo let me have my say, perhaps ten minutes in all, without showing any sign of disapproval or impatience. When I was finished, he asked: 'In which edition do you read Aristophanes?' I thought: has he not been listening? What has this question got to do with what I have been telling him? After a moment's ruffled hesitation I answered: 'The Teubner'. Leo: 'Oh, you read Aristophanes without a critical apparatus.' He said it quite calmly, without any sharpness, without a whiff of sarcasm, just sincerely taken aback that it was possible for a tolerably intelligent young man to do such a thing. I looked at the lawn nearby and had a single, overwelming sensation: νῦν μοι χάνοι εὐρεῖα χθών. Later it seemed to me that in that moment I had understood the meaning of real scholarship." Fraenkel is right of course, true scholarship is about getting the detail right, from which the large picture may be drawn. His epiphany about the nature of real scholarship I think also has something to do with modesty, about realizing how little you know. And there is something important in the gentleness of Leo, in his patience and humane treatment of his young and brilliant student; literae humaniores indeed.

Last week I invested in Petrocchi's Commedia secondo l'antica vulgata. It was published in four volumes between 1966-7 with Mondadori in Milan, and has now been republished with Le Lettere in 1994 as "Seconda ristampa riveduta". This might best be translated as a "corrected reprint edition". Pp. v-vii in Vol. 1 (Introduzione) explains what has been changed:
Purg. IV 132 per ch'io ➛ perch'io
XV 18 salendo su ➛ salendo sù
XXI 9 giù surto ➛ già surto
XXVIII 91 lo sommo Ben ➛ lo sommo ben
Par. XI 62 et coram patre ➛ e coram patre
XII 59 viva vertute ➛ viva vertute,
with a couple of these changes having appeared in the 1975 "Piccola Biblioteca Einaudi" text produced by Petrocchi. All modern editions and commentaries on the Commedia reproduce the Petrocchi edition, (the editions of Lanza and Sanguineti have not yet made an impact), but I was getting more and more impatient checking variants in the library. Some things you just need to have right beside you, all the time. The variants really are how the text was read as well as copied, so the criticus apparatus is as valuable to those interested in reception history as it is to textual critics.
Posted by Miglior acque at 12:21 pm 2 comments: 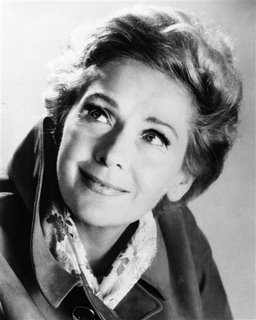 The great soprano Elisabeth Schwarzkopf died in Austria on Aug. 3rd. Alan Yentob, the creative director at the BBC said that her early recording of Strauss's Four Last Songs was for him a 'heart-stopper'. I could not agree more. The nuances and depths of her performance are utterly astonishing.

When she was a guest on Sue Lawley's Desert Island Disks she chose eight of her own recordings. That's class. She was also Stormin' Norman's aunt!!
Posted by Miglior acque at 9:59 pm 2 comments:

Campin in the Cloisters 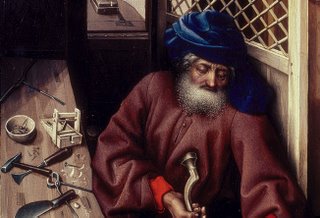 On my last couple of days in New York Betsy (who also stayed on for a bit) and I decided to visit The Cloisters, the medieval collection of the Metropolitan Museum of Modern Art. Though it is a trek up to 190th St., it was well worth it and had me rueing that uninspiring trip to the Met on Saturday evening. It was frankly pointless to drag everyone across Central Pk with little time after the final session to listen to a guide discuss works with a banality that might be interesting to 'tourists' but to a group of professional medievalists was just not on. Why didn't we go to the Cloisters instead? Why didn't we scrap the Plenary session on Friday morning on Exhibiting Art, and have those three professionals talk about three objects in the Cloisters and the problems confronting curators today? After you get over the fact that the whole place is fake, you realize that The Cloisters is beautiful. It's been constructed in a park and made look like a medieval monastery with a beautiful view out over the Hudson. What you find inside is wonderful. It's very evocative. Particularly noteworthy are the extraordinary Unicorn Tapestries, the Robert Campin Annunciation, detail of which above, and the exquisite Hours of Jeanne d'Evreaux. Do not miss the Cloisters on a visit to NY.

A visit to Twelfth Street Books (11 E 12th St., between 5th Ave./Univ.) proved interesting. It's a wonderful bookshop, full of quality secondhand books across a wide range of subjects. I picked up a copy of Toja's edition of Arnaut Daniel's Canzoni (Sansoni, 1961), and Bruno Nardi's Saggi e note di critica dantesca (Riccardo Ricciardi, 1966). Those were the 'finds'; other acquisitions: Teodolinda Barolini, The Undivine Comedy, Eugene Vance, From Topic to Tale, Donald Howard, The Idea of the Canterbury Tales, and JD Burnley's Guide to Chaucer's Language, all for considerably cheaper that the s/h stall in the conference. Never mind.

During some time eating & drinking in the Coliseum (312 W 58th St, opp. TimeWarner Center) one of the screens had CNN playing continuously. You realize how really deeply in trouble this country is when you watch the news for five minutes. CNN were running a very lengthy report, based on events in the Lebanon, entitled: "Is this the end of the world?" I swear. They had all sorts of nuts, Jews, Catholics, fundamentalist Christians (don't know what religion they are...), Republicans, the usual. This was a serious report. They were seriously asking whether we were witnessing the novissimi. Not on a lifestyle channel, or a religous freaky nut channel, or a pseudo-history channel. CNN. The national news. Ok, I know that decision makers and people who think don't watch CNN, but I'm afraid people who vote do. Oh boy. A real shiver-down-the-spine moment that was.
Posted by Miglior acque at 12:01 am No comments: 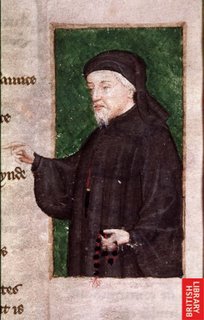 This post might also be considered a missive, for I write from the city of New York, sitting in exhaustion after five days of the 15th International Congress of the New Chaucer Society. It was a long conference, and perhaps too long. I'm staying in Empirestateview's apartment, and you really can see the Empire State Building from the apartment! The heat right now is oppressive, but I'm excited to be here.

I'm still digesting the conference and the papers, but hightlights included Caroline Barron talking about her discovery that Thomas Usk worked as a scribe for the Goldsmith's Guild, and Marion Turner's brilliantly suggestive piece on the Mercer's Petition and the House of Fame. There was also an extremely interesting paper by Catherine Eagleton on astrolabe texts and instrument texts in the 14th and 15th centuries. She is a formidable authority on the subject. Sessions also dealt with the subject of Adam Pynkhurst, does he matter? etc. They were very interesting sessions, except for some of the crazy textual people who seem to think that they have a direct line to the truth and are as ruthless as Microsoft about proprietorial opinions. A most undignified scene was witnessed in response to rather stimulating paper by Steve Partridge, whose very important edition of the glosses in the Canterbury Tales manuscripts is anxiously awaited by many, but alas I have completely forgotten her name nor the nature of her cavil. Come dice Virgilio a Dante: guarda e passa.

One of the great mysteries at the conference this year, like a veiled Greta Garbo or Jackie Onassis glimpsed darting into some exclusive residence for a moment, was the identity of Chaucer hath a blog. David Wallace, in a presidential address I shall leave to more authoritative people to comment upon, took a potshot at the blog, but the whole auditorium chuckled together, clearly showing everyone is reading him. It's a very clever blog. I recommend it.

The little book display was very disappointing. I don't know why it isn't a bit bigger, and the little second hand section was way overpriced. I dithered about buying the Bodley 638 facsimile and should have just bought the bloody thing, but I went back just a bit later and it was gone. Doh! Did pick up a copy of SAC 23 though. I also visited the Strand Bookshop, which reputedly has 18 miles of books. You kind of believe it when you walk in. It overwhelms you. I picked up a copy of Kretzmann, Kenny & Pinborg's Cambridge History of Later Medieval Philosophy for 15 dollars. I think that was very good value.

It was great to see the gang again, like Myra, Mary and Betsy (from way back when in NCS in Glasgow, imagine), and I also caught up with Claudia from Florence, who is here researching. (now she is a textual scholar!). It was a most happy coincidence to see her. And I had dinner with Jeremy, an old friend whom I do not see often enough.

New York is a beautiful city. I was expecting energy, a 24/7 kind of place, but I wasn't expecting to be so aesthetically pleased with the place...if that makes any sense. The architecture is of such high quality. I love the place, and I shall definitely be back.
Posted by Miglior acque at 3:19 pm No comments: