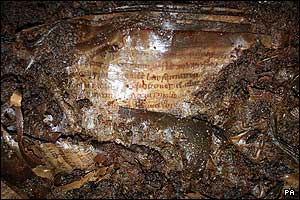 It is hard to imagine a more important manuscript discovery in my lifetime than that which occurred in July of this year.

Reports have mainly been restricted to the national and international press, necessarily undetailed and somewhat sensationalist. Archaeology Ireland 20/3 (2006) have now published a special supplement (ISBN 0953442640) entitled The Faddan More Psalter, providing more detail and superb photographs. There are six pieces in the supplement: Patrick F. Wallace, director of the National Museum of Ireland, has a short piece entitled 'A Stroke of Extreme Good Fortune'; Eamonn P. Kelly, Keeper of Irish Antiquities, National Museum of Ireland, has two pieces, the first called 'The Manuscript Discovered', including a fairly detailed description of exactly what is there, and the second 'Other Finds from the Faddan More bog'; Raghnall Ó Floinn, Head of Collections, National Museum of Ireland, has a piece entitled 'Identification', about how he copped that the only fragment of legible text, in ualle lacrimarum, came from Ps. 83. 7, and how that is the Gallican number 83, not the Hebrew 83, but the Hebrew 84, and no it was not about the destruction of Israel, and no it was not a sign of the novisssimi, which seemed to be what some wanted to believe; a learned piece by Bernard Meehan, Keeper of Manuscripts at Trinity College Library, helps to contextualize the importance of this discovery (more anon); and finally, Rolly Read, Head of Conservation, National Museum of Ireland, has a piece on the enormous conservation challenges presented by the codex.

Meehan's piece summarizes what is important about this MS. Its date is early, c.800, making such a discovery truly exceptional. Its original leather cover or wrap has been preserved, and only two other comparable manuscripts have covers, the Cadmug manuscript, and the Book of Armagh. The manuscript was produced on a lavish scale, not much smaller than the Book of Kells or the Macregol Gospels. A peek at the top corner of the first page (which is still too fragile to open yet) reveals a highly decorated page. It seems to be the letters TUS, and the higher parts of the other letters are just visible. It could be BEATUS, which might well be BEATUS UIR, the opening lines of the first Psalm. The image of a bird is visible, as well as other decorative features such as inked lozenges and a yellow and red positive-negative cross design. From the folio estimations made by Kelly it appears to have 52 or perhaps 54 leaves (104-8 pages, that is), and at ten words to a line, and 29-30 to a page, the Faddan More Psalter had plenty of vellum for the complete text of the Psalms as well as a couple of other pages of decoration. Meehan says that he only ever expected that we would widen our codicological knowledge of the period with a leaf or two turning up in the binding of a book somewhere, but never in his wildest dreams could a complete manuscript be discovered. Meehan also poses a number of questions that have you hopping off your chair with excitement: Will a fuller examination of script and decoration confirm or alter the initial supposition about the date of the manuscript? To what extent is the manuscript decorated? Does the manuscript contain any text other than the Psalms? Does a colophon name the scribe, his monastery or the date he was at work? Was there more than one scribe? Was the text glossed? What kind of pigments were used? Is the leather cover contemporary with the manuscript, is it attached, and is it decorated?

It is very fragile, and much of it will probably never be recovered, but what is left might well change the way we think about the ninth-century Irish and their Psalters.
Posted by Miglior acque at 8:40 pm