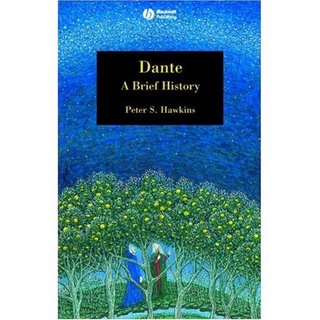 Eagerly anticipated, Peter Hawkins' new Dante: A Brief History is a wonderful read. There are five chapters in all, 'Dante's Life and Works', 'Dante's Journey to God', 'Dante's Beatrice', 'Dante's Religion', and finally 'Dante's Afterlife'. Since Hawkins' principal interests in Dante have been from a theological perspective, teaching as he did for some time at the Yale Divinity School, and now directing the Luce Program in Scripture and the Literary Arts at Boston University, the book is very much a meditation as much as it is 'A Brief History'. It is not aimed at a Dante specialist, but rather at a reader interested in some of the 'big ideas' around Dante. So Hawkins returns again and again to the idea of Beatrice, what she means, how she is to be interpreted. Indeed his chapter 'Dante' Beatrice' is a powerful and very challenging reading of this difficult figure. And Hawkins is not content with the standard view of the Commedia, and it is this that is so refreshing about the book. In the prologue he recounts how he returned to his undergraduate copy of the Commedia, to the great crowning scene in Purg 27, only to find his youthful marginal comment: 'Yawn'. His reading was taken up with greater enthusiasm in graduate school and subsequently and Hawkins wonders how the Commedia turned from a Yawn to a Passion. Unembarrassed questioning is the hallmark of the book.

The chapter on 'Dante's Religion' is one of the most succinct and interesting treatments of the subject I've read in a long time. One might think that such a subject would be necessarily full of platitudes and truisms but much that is fresh is brought to his analysis of the 'personal faith story' in the Commedia as well as some wonderful pages on the many smiles of the poem (pp. 122-130, which readers will recognize as a sythesized treatment drawn from his recent PMLA article).

The final chapter is a gorgeous discussion of 'Dante's Afterlife', mainly concentrating on visual workings and reworkings of the poem. Nothing is out of bounds, nor too low-brow for discussion. It's all in the mix, and it's a great mix. We get Robert Mankoff's cartoons for the New Yorker discussed with Edward Frascino's, or the Dante's Inferno Hell Test you can do online, or William Blake beside the wonderful Botticelli's drawings. Especially interesting is the lengthy discussion of Sandow Birk, whose 'Puppet Movie' I hope to see soon, and Birk and Marcus Sanders' three volume 'translation' into California youth-speak. There is also much on Gary Panter's reworking of the story, especially his Jimbo in Purgatory. I really didn't know the work of these post-modern interpreters of Dante and I'm very glad to have done so. The chapter made me rethink some old divisions and boundaries between so-called high and low culture. For example, think of Dante's own re-writings of the Aeneid at the beginning of the Commedia, how it is at once a rewriting and a surpassing.

He made me really think again about the importance of parody, humour, and anachronism in 'reading' and 're-reading' texts. Look at the rather wonderful Geoffrey Chaucer Hath a Blog, for instance and think about how consonant it is with Chaucerian textual strategies, and the extremely interesting dynamic with the 'guest bloggers' Katherine Swynford and Sir John Mandeville. Think about the way that the paratexte is nothing if not a polyphony of voices around the text, an interaction, a reading, a misreading, and think about the way many medieval commentaries and glosses are just like medieval blogs. The blog page sends you to links of other blogs, but also to other more general websites. And the links themselves are clever, like the link to the 'New Me Society'. Quotes, pointing hands, notae, page numbers, all occur in the margins, all direct your attention to somewhere else, all invite you to reread, to rethink.

It's fair to say that Dante: A Brief History got me thinking and rethinking. It's a significant contribution to recent criticism and will be enjoyed widely. Read it.
Posted by Miglior acque at 11:01 am

I am ordering it as we speak. It sounds directly up my ally, particularly the bit about the importance of reworking and parody as a significant part of both medieval and modern intellectual dialogue. I am very excited. Thanks for bringing it to my attention.