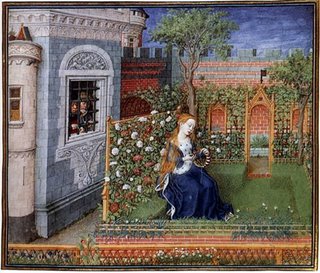 I recently heard a discussion about Wi-Fi on the radio and they used the expression 'walled garden'. It is a marketing and e-commerce term used to describe the way a company providing a service, such as Wi-Fi, will only allow you to access and purchase products and services provided by them. It essentially creates a monopoly, which can be for profit, as in the case of company, or for protection, as in the case of schools that have a closed network environment. The term's creator is thought to be John Malone (former owner of Tele-Communications Inc., bought by AT&T), but I can't resist citing the Wikipedia entry on this term, which under History says:

"The first use of the term "walled garden" to describe a protected collection of information may date to Alcuin of York, the English scholar who established Charlemagne's famous library. In 796, he sent some of his pupils back to his old school at York to retrieve a number of rare manuscripts: "I say this that you may agree to send some of our boys to get everything we need from there and bring the flowers of Britain back to France that as well as the walled garden in York there may be off-shoots of paradise bearing fruit in Tours."

Alcuin is probably punning on the etymology of 'Paradise', which is from a Persian word for enclosed garden. The background of such an image is undoubtedly the Canticum canticorum, and the image of the hortus conclusus (for example at Ct 4. 12; translating ּּגַּן נָעוּל). It is interesting to note that the Hebrew word gan (garden) shares the same root as defend (ganan), whereas the Indo-European root of the word, gher, means to grasp or enclose (see Blomley, 'The Borrowed View: Privacy, Property, and the Entanglements of Property', Law and Social Inquiry, 30 [2005], 623). So the 'walled garden' has a complex set of associations between protecting/defending and enclosing or cutting off.

Look, too, at the illustration, which is from Vienna, Österreichischen Nationalbibliothek, MS 2617, f. 53r, a copy of the French translation of Boccaccio's Teseida. This manuscript contains an extraordinary set of illuminations by Barthélemy van Eyck commissioned by King René of Anjou. In the above illumination you see Emilia sitting in her enclosed garden, surrounded by all manner of flowers, as the two Theban prisoners look out at her from their cell. There is even an article that identifies all of the flowers in this garden and tries to tell which month of the year it is: Marie-Thérèse Goussett, 'Le jardin d'Émilie', Revue de la Bibliothèque Nationale, 22 (1986), 7-24. Emily is being protected in her garden, cut off from male company, essentially a kind of prisoner. The two men, looking out from their window, are prisoners too, but have the 'freedom' to look, and both fall in love with her at this moment. Notice how she does not engage with them, she has her back to them and is engrossed in making a garland of flowers. In the Italian text she is a bit of a flirt with the boys and she knows that they are looking at her.

And think then of the 'walled garden' in Chaucer's Parliament of Fowls, and how he is playing with the genre of the sacred paradisal garden full of wonderful birds and flowers, but also containing a structure, in which we find Venus, and those who have been destroyed by love. It's a kind of nightmarish claustrophobic hot-house within the walled garden. And like surfing the net within a 'walled garden' environment, Chaucer is trying to make sense of love with what he is allowed access to within the garden.
Posted by Miglior acque at 9:52 am