Olivia Holmes, Assembling the Lyric Self (U Minnesota Press, 2000) 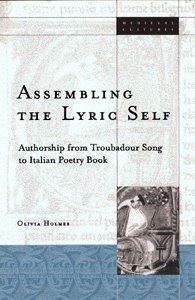 Olivia Holmes makes a powerful argument that some early French and Italian manuscripts display highly wrought self-conscious impulses to arrange and gather verse into authorial cycles, an impulse we more often associate with much later traditions, such as Dante's Vita Nova and more famously Petrarch's Rerum vulgarium fragmenta. In this she is largely successful, and makes for a very enjoyable read (I particularly enjoyed the chapter on Nicolò de' Rossi).

My criticism should not really detract from what has been achieved in the book. The novelty of Holmes' approach is that the texts under discussion do not come from critical editions but from manuscripts, which has the effect of creating a peculiar alterityabout some familiar texts. This is much to be praised. She discusses some rather well-known manuscripts, such as Modena, Biblioteca Estense e Universitaria α. R. 4. 4., and Chigiano L. VIII. 305, to name but two. The reason for a paucity of descriptive accounts of the manuscript's construction and planning is that these MSS have been described elsewhere, and indeed exist in facsimile (such as Chig. L. V. 176, Boccaccio's autograph no less). However, I feel that since she relies so heavily on the particularity of these examples, the best way to reinforce her observations is by making her reader very very aware of its physical format. We need to know things like collation, ink, parchment, scripts: has the manuscript been put together over a period of time or does it look like it was produced in one coherent block? What evidence is there of ownership? How many scribes worked on it? Do they look professional? How formal is the manuscript? What does its format suggest about the book's use? In sum, it is not enough just to cite from manuscripts, but you've got to give a voice to the physical manuscript itself to really appreciate all that manuscripts have to offer.
Posted by Miglior acque at 2:46 pm