Astell on Job, reviewed by Lerer 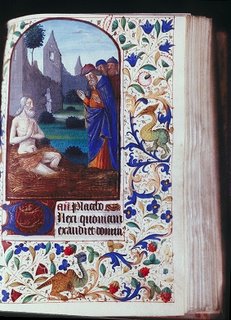 It is a commonplace that academics are embittered jealous failed creative types who eventually succumb to drink or some other such self-destructive behaviour, and who rarely have anything positive to say about fellow academics. Reading reviews can often give one a glimpse of these tendencies, side swipes here and there, footnotes that are less composed to convey information but are meant as a glove used to smack one on the face.
But it was with joy that I read Seth Lerer's review of Ann Astell's book Job, Boethius, and Epic Truth (Cornell UP, 1994) published in Speculum 70 (1995), 869-871. The review opens: 'This is a book of literary criticism; but it is, as well, a testament of faith.' He goes on to look at Astell's treatment of the medieval reception of Boethius' Consolation of Philosophy, pointing out the very stimulating aspects of the study; pointing out too, its deficiencies, where it elides certain problems of textual transmission. He ends the review with an extraordinary, generous, and magnanimous recommendation that could only be produced by a mind capable of breadth, embrace, and art:
'In spite of these criticism, or perhaps because of them, this is a book that I have come to admire with each rereading. It is a rarity in academic criticism: a study of great learning and great belief, whose arguments are voiced without the slightest tinge of pedantry or condescension. It illustrates a way of reading literature as a spiritual humanist; and if its deep faith in a higher truth seems out of step with current institutional uncertainty, then at the very least it should refresh the reader with the courage of its critical convictions.'
Posted by Miglior acque at 2:28 pm