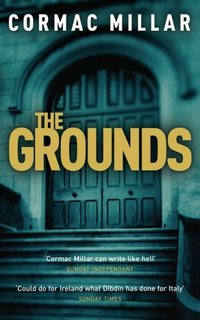 First of all, I feel it is only fair to say that I know Cormac Millar. He teaches Italian, as Cormac Ó Cuilleanáin, at Trinity College Dublin, where, for his sins, he taught me. He is a man of uncommon erudition, of intellectual humanism, and wicked generous wit. I say this because these are attributes that glitter and coruscate throughout The Grounds, his second novel. Millar has certainly raised his game from the first - very enjoyable - novel, An Irish Solution (Penguin, 2005), and the prose has levelled off at a cruising altitude that is both satisfying and challenging. The book just sparkles, it really does; this short review can not do justice to this complex and exciting work.

Séamus Joyce returns to his alma mater, King's College Dublin, to report back to an American university consortium on its suitability for investment. The academics, for a host of different reasons, all look on Joyce with suspicion and alarm. Things get sticky when the college president is found murdered and it looks like he himself is being framed for the delitto. What does it have to do with the painful and seemingly pointless changes being proposed for the venerable institution? And what has happened to a senior historian, whose research assistant's body was found washed up? Can all these deaths be related? But how? We meet a host of academic types who all expend vast energy sniping at each other in a wildy enjoyable manner. There is a property developer who has virtually bought the campus and is busily building apartments everywhere, and there is Séamus's ex-girlfriend, now a junior academic at King's, who is behaving oddly and doesn't have a permanent job! All is not as it appears, even at second glance, at King's College.

Cormac Millar's mother was the distinguished Irish writer Eilís Dillon, and the mise-en-scène of The Grounds is drawn from her 1956 novel Death in the Quadrangle (Faber). As such we are dealing with no ordinary crime novel, but rather a complex, intertextual and extratextual, literary work. This dimension only adds to the internal literary complexity of the book. And of course while the author assures us in a note at the end of the novel that this is not a roman à clef, one cannot resist wondering just how resonant it is with current business plans to keep Trinity College floating with its head just above water. Humanism does not fit well into business plans, it doesn't have a heading of its own, it cannot be poked and prodded, and it cannot be patented. It just won't do.

Sit back and enjoy this funny and clever novel from a powerful new voice in Irish crime fiction. You won't regret it.
Posted by Miglior acque at 8:15 pm

I'm waiting for the series of chick lit novels by Corinna Lonergan myself.

I'm going to hear this chap speak on saturday next about crime writing - should be good.

You'll enjoy it Tracker Knacker; post back and let me know how it went. You read the book/s?