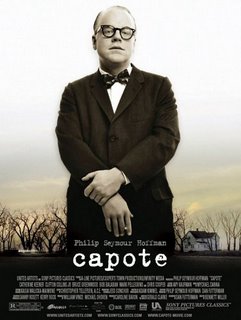 Capote is the story of the circumstances of Truman Capote's writing of In Cold Blood. Capote reads a short column in the New York Timesof the mysterious killing of a family in Kansas and becomes fascinated. He goes with his friend and research assistant, Harper Lee, to the town of Halcomb and and is profoundly moved by the experience. He follows the trial and befriends the killers, especially one, Perry Smith. The book Capote wants to write is a new kind of book, a fictional work based on true events, the non-fiction novel.

The killers' resistance of the death penalty and Truman Capote's desire to finish the book are represented in the film as opposing each other, and the tension that arises from that is very interesting. He wants to help them, finding them a lawyer for appeals etc, but he wants to write the end of his book. This end that he desires must result in their execution, and when it does happen it shocks him deeply. His self-obsession is clear at the beginning of the film, but the book grows into a destructive obsession that almost transcends his own enormous ego. He confronts questions of honesty and truth, and how the process of creating must incorporate these. It's a challenging film, in many ways.

While the direction is not always as artistically assured as it could be, Phillip Seymour Hoffman gives nothing short of a masterclass in acting in this film. He is just extraordinary. You are utterly convinced and moved by his remarkable performance and for it alone this film is a must see.
Posted by Miglior acque at 9:15 pm