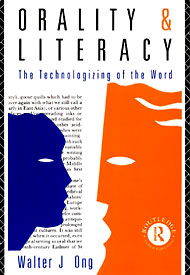 Ong's Orality and Literacy is a classic of its kind. A kind of response to Marshall McLuhan ('The medium is the message' and all that) and an extended discussion of what Orality and Literacy actually means. The book also refers briefly to Derrida et al., but clearly isn't going to go into it. Ong is mainly interested in what he calls primary orality, meaning communities who have no contact with the written word whatsoever. Such communities must surely be hard to find now, and indeed in much of his discussion anything after oral Plato is not quite in this category of orality. Even the so-called primitive society (the kind of stuff Lévi-Strauss ran around looking for), I wonder if they really fit in. Is there really any such thing as primary orality?

His discussion of the changes in literacy and orality in the move between manuscript and print is interesting, though I do wonder a bit about his presentation of manuscript production, and the whole notion that manuscripts were so difficult to read printing really had to be invented. Well, they might look difficult to read by comparison to print, but when there's nothing else, then they are not difficult to read. They just are. Ok, there are cases where scribes copying abbreviations can make mistakes, but that does not mean they found them difficult, it means they are human and make mistakes. Books are often spotted with typos, which doesn't mean that books are hard to read. The restricted access to books in a manuscript culture is a complex phenomenon, and manuscripts cannot be 'blamed' for the fact that they don't look like printed books.
Posted by Miglior acque at 1:55 pm