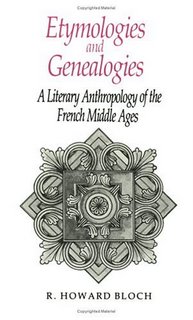 R. Howard Bloch's Etymologies and Genealogies is an exploration of medieval French literature on the crest of the wave of mainly French theoretical work in the two decades from the Sixties onwards. Derrida, Saussure, Lévi-Strauss, Barthes, de Certeau, are all names that loom large. Bloch takes a central theme and preoccupation in the French Middle Ages, that of lineage, and extends it to an examination of grammar and literature, to ideas of kinship, romance and lyric. And much more.

The book is very interesting and quite a challenging read, and is a good example of a heavy hitting theorist writing about the Middle Ages. I'm not sure whether he's made me rethink anything, but I did take the book seriously as I read it. So that's something. The prose is a little impenetrable at times and might have done with a little clarifying here and there. Anyway, most books of this kind are rubbish (frankly), but I don't think this one is.
Posted by Miglior acque at 10:55 pm