"I woke up and sighed: the world was Marian" 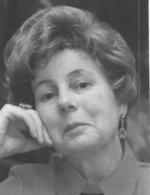 Uta Ranke-Heinemann is a German theologian who is most famous for being the first woman to gain a chair in theology at the University of Essen, and the first to lose it after denying the virgin birth and was excommunicated in 1987. She is most famous in the English-speaking world for her wonderful book Eunuchs for the Kingdom of Heaven.
In an interview last year she talked about her admiration for Ratzinger's intelligence and compared it unfavourably with JPII. "The enormous difference between John Paul II and Ratzinger is intelligence. Ratzinger is more, much more, intelligent. Quite frankly, John Paul II was tedious without end. I couldn’t stand it any more. He was obsessed with Mary. “Mary, Mary, Mary,” he repeated over and over and over. I mean, I feel much for Mary myself, because she lost her son. But John Paul II said Mary was glad to see her son on the cross and that she would have put him there herself because it meant our salvation. I tell you, Ratzinger would not say such a stupid, horrible thing! No, he has much more taste than that. Ratzinger has much more of what the French call esprit de finesse. And John Paul II had none! ... At Munich, Ratzinger did his doctorate with professor Söhngen, and I did mine with professor Schmaus. This was in 1954—at the time of Pius XII’s dogma about Mary being received into heaven. Söhngen quoted Jerome who, around 400, said: “I woke up and sighed: the world was Arian.” (Arius was the great heretic who denied the divinity of Jesus.) And similarly, Söhngen said about Pius XII’s dogma, “I woke up and sighed: the world was Marian.” So, none of us, including Ratzinger, Söhngen’s main doctoral student, were excessive Marians." On the future of the Church she says: "I don’t see any future for a church in which all shepherds are men, and all women are sheep. How could that be a universal church? It’s a mutilated construct!...The church will continue as it always has. Ratzinger will not change 2,000 years of male domination. But perhaps he might make one tiny change for the better. He might permit the use of condoms in AIDS-ravaged Africa. Those women in Africa who are told by their priests that they will go to hell if they use condoms—well, those women are told they're the martyrs of this millennium!"
Posted by Miglior acque at 6:09 pm

A point you have to consider regarding Marianism is one that stuck me as a major difference in Catholicism at home and Catholicism away, namely that the worship of Mary takes a much more central position in Central and Eastern Europe than it does in Western Christianity (Western in the sense of beyond, say, the German-Polish border). The Virgin Mary is indeed more central to these areas, and it is therefore no wonder that the Polish pontiff should place much more weight on it than his western colleagues. There are more shrines to the Virgin Mary in Poland than in the rest of Europe. An interesting thought is that the less the Catholic community in an area had to do with protestantism (which rejects Marian worship as 'idolatry'), the greater is the role of the Virgin Mary in the Catholicism of that area (though this is just my idea, feel free to reject it).

That is interesting, and I am sure very true. It also helps explain why JPII was so popular in Ireland, because the Irish go a bit off their heads for Mary too. I would bet that the number of Marian shrines would come close to that in Poland; every town, on roadsides, the most out of the way place, you find a Marian shrine. For many years there was a prominent Marian Shrine right in the centre of O'Connell St, the centre of Dublin city. The Celtic Tiger has since gobbled her up.

I was interested in two things here: the idea that Marian worship is populist, and doesn't really belong in the Catholic intellectual tradition; and how Uta R-H saw already (just after Ratzinger's election) the possibility of a relaxation of the Vatican position on condoms. Again, intimately linked to R.'s very powerful intellect. It's as if she's saying that the hard line of JPII had to do with him being rather more pious than intelligent.

John Paul was as much a philosopher as Benedict; but, in general, the quality of Benedict's philosophy is more rational, that is, logical and disinterested, than his predecessor's phenomenology of feeling and emotion. Personally, I prefer reading Benedict's theological writings; I like his measured approach, acute focus and crystalline style.

Darragh, you're a bigger fan and more an admirer of JPII than I!

I like John Paul's 1998 encyclical Fides et Ratio; it contains a wonderfully compact yet erudite history of western philosophy and theology as well as one of the clearest statements of the Church's position concerning the essential non-contradiction of true reason and true revelation. It's a genuinely good read!