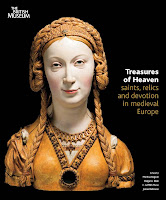 This is an exciting year for Christian Materiality, as well as for Material Christians. Those interested in the former and who, in fact, are the latter can now acquire the new and excellent Caroline Walker Bynum, Christian Materiality: An Essay on Religion in Late Medieval Europe (New York: Zone, 2011). This, combined with the major exhibition at the British Museum, Treasures of Heaven: Saints, Relics and Devotion in Medieval Europe (with a beautiful catalogue edited by Martina Bagnoli, Holgar A. Klein, C. Griffith Mann and James Robinson, British Museum Press, 2011), makes for lots to think about.


Anyone who knows Bynum’s work, especially her recent essays and lectures, will find the argument and material discussed in this book familiar. It is written in a highly readable style and is clearly intended for a very wide, non specialist, audience. As anyone knows who has tried to do such a thing, it is extremely difficult and requires enormous expertise and control. Caroline Bynum is gifted with all of these skills and the result is a marvellous exploration of one fascination aspect of medieval religious practice. The book is divided into four main chapters: 1. Visual Matter; 2. The Power of Objects; 3. Holy Pieces; and 4. Matter and Miracles. These are supplemented with fifty black-and-white illustrations and a richly documented store of notes at the end (though no bibliography). 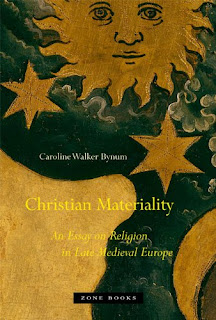 In her introduction, Bynum discusses how she is interested in exploring ‘one of the central contradictions of the later Middle Ages: the increasing prominence of holy matter in a religion also characterized by a need for human agency on the part of the faithful, a turn to interiority on the part of spiritual writers and reform-minded church leaders, and an upsurge of voluntarism, negative theology, and mysticism’ (p. 18). She talks a lot about the thingness of holy matter and how those critical views suggesting that these objects always pointed beyond themselves fails to do sufficient justice to just how thingy they are, how they call attention to themselves as things. She also discusses what she means by materiality, emphasizing its plasticity and tactility, developing these around ideas of fragmentation, parts, and wholes. She seeks to clarify what she means by the ‘body’, ‘materiality and agency’ and ‘material culture’, terms used with an historical perspective and in contrast to their current, popular use in cultural studies. (There’s a very enjoyable impatience in her attitude to how her own work has becomes subsumed into some of these new trendy topics).

The very schematic table of contents is richly suggestive of what the reader will find inside:
Introduction, Nicholas of Cusa and the Hosts of Andechs; The Periodization of Holy Matter; Materiliaty; Beyond “the Body”; Matter as Paradox. Visual Matter, Image Theory; The Materiality of Images: Two Theoretical Considerations; The Materiality of Images: Examples; Viewer Response; Materiality as Self-Referential; Material Iconography; The Material in the Visionary; Living Images; The Cross; Conclusion. The Power of Objects, Two Caveats; Definitions and Examples: Bodily Relics and Contact Relics, Dauerwunder, Sacramentals and Prodigies; The Theology of Holy Matter: Relics, Sacramentals and Dauerwunder; Dissident and Heretical Critiques; The Example of Johannes Bremer; Holy Matter in Social Context; The Case of Wilsnack; Conclusion. Holy Pieces, Parts, Wholes, and Triumph over Decay; Theologians and the Problems of Putrefaction; The Contradiction: Fragmentation as Opportunity; A Comparison with Jewish Practice; The Iconography of Parts and Wholes: The Example of the Side Wound; Concomitance as Theory and Habit of Mind; Conclusion. Matter and Miracles, Three Examples; Elite and Popular: Again a Caveat; Theories of Miracle as a Way of Accessing Assumptions about Matter; The Historiography of Matter; Conceptions of Matter and Change; Change as Threat and Opportunity: A Reprise; Reducing Change to Appearance; Explaining Miracles by Limiting Change; Using Physiological Theories to Contain Miracles; Matter as Dynamic Substratum; Holy Matter as Triumph over Matter; The Materiality of Creation. Conclusion, Reinterpreting the Fifteenth and Sixteenth Centuries; Jews, Muslims, and Christians; Theories, Medieval and Modern; Again the Paradox.


Listen to Caroline Bynum talk about miracles at Stanford

‘Treasures of Heaven: Saints, Relics and Devotion in Medieval Europe’ is a major exhibition at the British Museum, running from 23 June — 9 October 2011. It had previously been mounted at The Cleveland Museum of Art and The Walters Art Museum. Bringing together a range of material from all over Europe, it successfully demonstrates the diversity, the quality and the beauty of many of these objects. Highlights include the wonderful Reliquary of the Holy Thorn, about 1390–97, France, commissioned by Jean, Duc de Berry (watch Dora Thornton talk about it here); the Reliquary head of St Eustace, about 1200, Basle, Switzerland; the wonderful material relating to St Cuthbert and St Thomas Becket. I was thrilled to see the gorgeous reliquary now in the Metropolitan Museum of Art (see here). 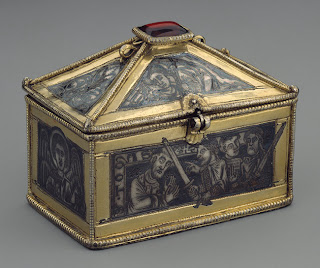 Dating to around 1173–1180, it is in silver, with niello and gemstone, and measures just 2¼ × 2¾ × 1¾ in. (5.7 × 7 × 3.4 cm)—that is, very small, especially given the exquisite detail. Since Thomas was martyred in 1170, it is a very early example of a reliquary associated with him. The sides display a brief narrative of Thomas’s martyrdom, four knights assaulting him, one extending a sword towards his neck, which was bowed as in prayer when he was killed. An angel on the lid makes a sign of blessing over the event. On the other side (not shown above), Thomas’s body lies in state, while an angel carries a small child—the saint’s soul—to heaven. The top of the casket is set with a piece of red glass (supposed to be a ruby) and it seems likely that the casket contained a blood relic. Bynum illustrates this piece in Christian Materiality, fig. 15, p. 72, says of it on pp. 70–1: ‘the reliquary of Thomas Becket’s blood, the blood itself (which is presumably a few rusty, dried flakes) is hidden in a casket, not displayed, but a large jewel has been constructed on the top by backing rock crystal with red foil to evoke the redness of blood. The stuff of the jewel is palpable and shouts out living redness, but it plays visually with its own physicality; it is neither the blood in the container nor the ruby it appears to be’. See too the catalogue entry by Barbara Drake Boehm, no. 97, p. 186, for a circumspect analysis of the inscription, partially damaged, and what might have been contained in this reliquary.

The catalogue, beautifully illustrated, has the following essays: 1. Derek Krueger, ‘The Religion of Relics in Late Antiquity and Byzantium’; Arnold Angenendt, ‘Relics and Their Veneration’; Holger A. Klein, ‘Sacred Things and Holy Bodies: Collecting Relics from Late Antiquity to the Early Renaissance’; Guido Cornini, ‘“Non Est in Toto Sanctior Orbe Locus”: Collecting Relics in Early Medieval Rome’; Éric Palazzo, ‘Relics, Liturgical Space, and the Theology of the Church’; James Robinson, ‘From Altar to Amulet: Relics, Portability, and Devotion’; Martina Bagnoli, ‘The Stuff of Heaven: Materials and Craftsmanship in Medieval Reliquaries; Barbara Drake Boehm, ‘“A Brilliant Resurrection”: Enamel Shrines for Relics in Limoges and Cologne, 1100–1230’; Cynthia Hahn, ‘The Spectacle of the Charismatic Body: Patrons, Artists, and Body-Part Reliquaries’; and finally, Alexander Nagel, ‘The Afterlife of the Reliquary’.

Those who can are encouraged to watch the recent one-hour piece on BBC 4 presented by Andrew Graham-Dixon, featuring Sr Wendy Beckett and Neil MacGregor (as well as Pembroke’s own Emily Guerry talking about La Sainte-Chapelle). Well worth watching, with an especially interesting segment on Bishop Oscar Romero, known in El Salvador as San Romero.

Read Bynum’s new book, go to the exhibtion.
Posted by Miglior acque at 9:18 am