Books, and What to Do with Them 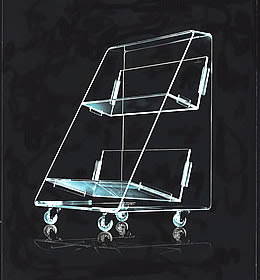 I am a simple man with simple taste. The worst part of my taste is that it is so good, resulting in me constantly having to do without what those tastes demand. Some years ago I was at a meeting with a medievalist in Oxford. While in her rooms I noticed a rather nice book caddy in perspex set on castors. She told me that she had bought it in Habitat and set me off on a quête worthy of a medieval knight. Now mostly when I visit scholars in their place of work I’m more distracted by what is on the shelves rather than the shelves themselves. I don’t often suffer from shelf envy; that happens much more often with books. But this was a bit different. It was one of a series of limited edition pieces that Habitat, in 2004, had commissioned from various celebs to celebrate 40 years in business. The book caddy was designed by Louis de Bernières, intended to hold those books used very often, like a thesaurus or a dictionary, and to save having to get up from one’s desk. From time to time (which means, eh...daily) I look on Ebay and generally online to see if one might appear for sale and it never does. It would seem that when they said limited edition, they meant it. As Habitat goes into administration, and its future is uncertain, my mind turns once again to this lovely book caddy and I wonder will one ever appear. I know exactly what I would put on these shelves too, my copy of the Commedia (Petrocchi, Repr. corr. edn. 1994 [4 vols]), the Rime (De Robertis, 2002 [5 vols]), the Convivio (Brambilla Ageno, 1995 [3 vols]) and the Monarchia (Shaw, 2009 [1 vol]) in the Edizione Nazionale delle Opere di Dante (Firenze: Le Lettere), and my Enciclopedia Dantesca (ed. Umberto Bosco, 1970–8 [6 vols]).
I did spot one in Lady Antonia Fraser’s study, though not while we were having tea and talking about literature and scented candles. Rather, it was while I was having tea with myself and reading the Guardian’s wonderful online (though now sadly discontinued) Writer’s Rooms series, photographed by Eamonn McCabe. 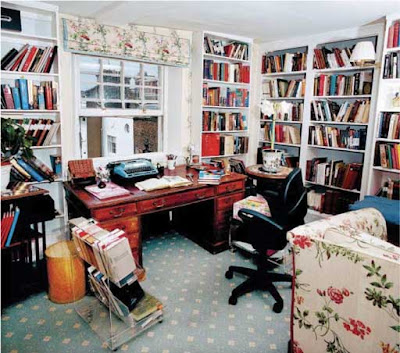 There must be something wrong with me that while I admire the lovely bookcases, the gorgeous desk and elegant room, I cannot really keep my eyes of that little book caddy.
Posted by Miglior acque at 3:45 pm