Getting off the Hook 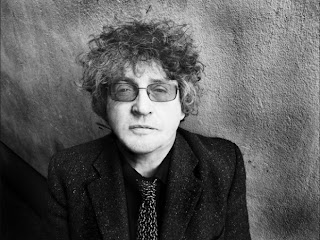 Last night Paul Muldoon gave the opening address for the DLR Poetry Now 2010 Festival. I use the term address because its primary sense, as a verb, is to make straight, to put things right, in order. This was a man with things to say, things of poetry, things of family, of suffering. Of pain. It was one of the most exhilarating evenings I have had in a very long time and I would like to write about it.

The title of the evening's contribution was 'Go Fish: Six Irish Poems'. These poems were: Louis MacNeice, 'Sunday Morning'; W.R. Rodgers, 'The Net'; John Montague, 'The Trout'; Seamus Heaney, 'The Guttural Muse' and 'Limbo'; Medbh McGuckian, 'The Flower Master'; Nuala Ní Dhomhnaill, 'The Shannon Estuary Welcoming the Fish'. Just as Muldoon got up to speak before an eager audience a gentleman stood up and demanded to know where he stood on Provisional IRA violence in Northern Ireland. The room froze. Muldoon stood for a moment awkwardly and said that on a good day he stood for himself and there was a nervous laugh, nervously hoping it was all over. It wasn't. The man would not be satisfied with this and persisted. 'I am from Northern Ireland and you represent me, so I want to know where you stand'. Muldoon explained that politics changes, in a way that makes it a difficult subject-matter for poetry. With a bit of heckling from the audience who were saying to the gentleman that it was not the occasion, Muldoon managed to get started.

When it came to read the first poem he paused, looked up and invited the gentleman to read Louis MacNeice, 'Sunday Morning'. It was a stunning move, generous, comfortable, from a man who wanted to involve his audience, every one of them, in his task for the evening. The politics might not be settled and remain divisive, but reading a poem together. Yes, we can do that. The man got up and you know what, he read it rather well. There was a solidity and robustness to his reading that actually worked most unexpectedly. The man finished reading and walked out. It was a pity he did. He would have heard a lot had he remained.

Another gentleman was invited to read Montague's 'The Trout', but he had forgotten his reading glasses on the train from Limerick. His reading was difficult, stilted and halting. It was a powerful and apposite reminder that reading is difficult. And that reading a poem with ease can really not be how it is in the poem at all. Muldoon stood behind him like an angel at St Jerome's shoulder, prompting him when he fell. It was heartbreakingly beautiful and I am filled with emotion even remembering it.

The work of two other poets were read by the poets themselves, Seamus Heaney and Medbh McGuckian. Heaney got up and said: "The Guttural Muse, by Seamus Heaney". As usual claiming no special place, no special right.

Muldoon continued to speak and outlined with a dazzling display of learning and deep reading his sense of a theme running through these poems of fish and water, used in a whole variety of ways with very different effects. It was an extraordinary soundscape of Irish poetry, with Muldoon pausing over words with the delicacy of a carpenter touching a piece of fine wood, a man aware of what it is, of what it was, and of what it might be.

The address was punctuated with autobiographical details. As my medievalist readers will know, and any editors surely do, punctuation can change everything and so this punctuation was everything and changed everything. He spoke about child abuse, something of which as a child he was vividly aware. And he spoke about his sister and her experience. (I couldn't stop re-reading in my mind Muldoon's poem 'The Misfits', from Moy Sand and Gravel.) The abuse of power on the part of the Church is so widespread, so terrible, dreadful—in the sense of one being full of dread. He spoke of the Pastoral Letter issued by Papa Ratzinger, of its inadequacy, its sheer utter inadequacy.

Muldoon's address was marked by a sense of a fullness of time, a timeliness, of καιρός. It was political, social, and yes, it was poetic. The time is now. Muldoon's time is now. Us readers, our time is now.

Last night the poetry belonged to the audience; it was empowering. It was special.
Posted by Miglior acque at 8:34 am