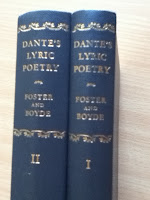 Readers may have noticed that another item has been removed from the sidebar section listing the ‘Books I Dream of Owning’. That is Foster and Boyde’s Dante’s Lyric Poetry (Clarendon Press, 1967). I’d been slightly despairing of finding it, and had encountered some friends and colleagues who had their own copies, found for a song here and there, or given as gifts by retiring colleagues and the like (you know who you are). I’d received a note about a copy in an Italian bookshop, no dustjacket, with some pencil marks, for a whopping €800. Yes, you read that right, eight-hundred euro. That rather put me off, and had me worried about other sellers getting ideas.

Fortunately, a very reasonable bookseller in Montana (imagine) put his copy up for a what we’ll call a normal price, recognizing that it had no dustjacket, that there was a small water stain, etc. By no means a mint copy. However, in very good nick. I’m so happy to have this. The power and lucid brilliance of the commentary is wondrous, and as a translation it really has not dated. I’m always puzzled that OUP have never reprinted it.


The other addition to the crazy man library is the ‘edizione diplomatico-interpretativa’ of MS Hamilton 90 (Boccaccio’s autograph of the Decameron), edited by Charles S. Singleton and published by Johns Hopkins University Press in 1974. It’s quite an interesting volume and I’d been on the lookout for it for a while, and you do indeed see copies appearing, and sometimes not for crazy prices. But when I saw this one online for £2.50, I thought: this is a kind of craziness I can really get behind. In lovely condition, ex-library, usual stamps (as they say), but a good deal more than adequate as a study copy. I have already cited it in a footnote, so it has now earned its keep on the shelf. I think I’d rather like to have Singleton’s 1955 Laterza edition of the Decameron, and, again, you do see copies around, but I’ve been put off by them being ever so slightly pricy, and of course the enormous, exaggerated postage costs from Italy.

Now, back to (my) Boccaccio. 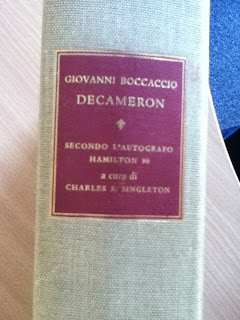 Posted by Miglior acque at 9:32 pm

This is splendid! I've just found the proceedings of the first big conference on Tain Bo Cuailnge ('ULIDIA') for a song in a Canterbury Oxfam...! Amazing, as I needed to use it that very day and have never owned a copy...