It’s been an age since I posted last. I’ve been very busy I have to say, working, teaching, writing and the like. More anon. But for now, some book craziness, just to reassure you that things are ticking along nicely.

Some time ago I posted about wanting the Habitat Louis de Bernières Book Caddy and despaired of ever finding one. This cyber lament appears to have been an excellent idea because I was contacted by someone who had one to sell and before putting it on eBay, he offered me first refusal. Needless to say, I jumped at the chance. So here is a little picture of it, in red, up against my red couch! You’ll immediately see that it is a Dante Caddy, with the Ricciardi Opere minori, the Meridiani Commedia and the first volume of the Opere, the SISMEL Comedìa and the Rime on the upper shelf, while on the lower shelf is the Edizione nazionale, Commedia, Rime, Convivio, Monarchia, and then the 1932 Vita nuova. All on wheels. What’s not to love! 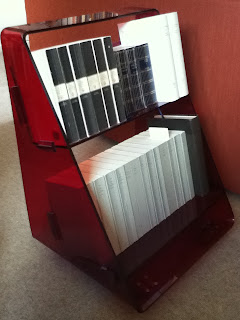 I’ve been making some exciting acquisitions lately, such as a lovely (unread and uncut) copy of Branca’s critical edition of the Decameron published by the Accademia della Crusca in 1976. It is quite hard to find, and, very appropriately, I found it the very day before I travelled to Berlin to see the autograph manuscript, MS Hamilton 90. Exciting and enjoyable and fascinating. I also acquired the Storia della lingua italiana Einaudi, which I’m very happy with and am using quite a bit lately. I ordered what I thought would be the three volumes of the Grande grammatica italiana di consultazione from BOL.it but they are having trouble finding the first and third volumes, alas. My GDLI is growing nicely, with recent acquisitions of the two supplements (2004 and 2009), the latter of which was bought for a mere £2.50 online and which I was almost incredulous to find at that price. I’ve also acquired Bruni’s L’italiano nelle regioni, vol. 1, Lingua nazionale e identità regionali and vol. 2, Testi e documenti, and am delighted with it. You’ll see there Serianni’s Grammatica italiana, all keyed to the GDLI. 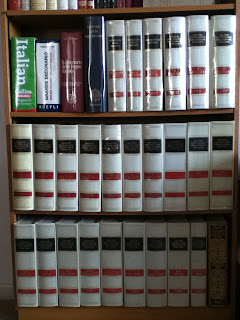 I also made another acquisition (or rather a gift, actually) which is the Storia della letteratura italiana published by Salerno, in the volumes that appeared along with Il Sole 24 Ore. The pagination is the same and so it is possible to cite from them without having to check the Library copy, so they’re extremely useful and I’m delighted to have them. It’s in 24 volumes, which is a bit bulky, but it is very useful. 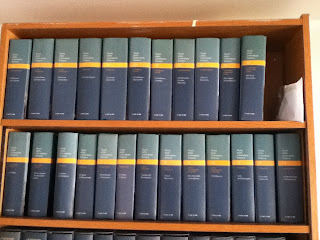 Posted by Miglior acque at 2:07 pm

How strange... in fulfilling my own exact same search as you for these shelves around eBay and the internet generally I literally just stumbled upon your original blog post. Then found my way to your home page to discover your search has born fruit!

Congratulations in the first instance. This gives me hope one will emerge for me at some point and should you ever be offered a 2nd set (and not want it for yourself!) please feel free to pass it in my direction!

Hey Nick, if you do a search for
Habitat VIP Acrylic Bookcase on eBay right now you'll find one for sale.

Nooooooo.... I only just saw your kind response and, no surprise, that ship has sailed. I'll keep checking the blog more frequently in case you ever come across another. Many thanks