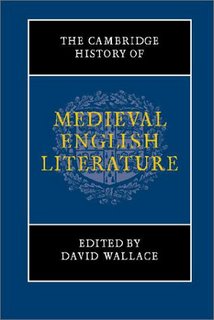 Today I picked up a s/h copy of David Wallace's Medieval English Literature, and read Christopher Baswell's contribution called 'Latinitas'. It's a very very good chapter on the complexity of the idea of Latin(s) in medieval England:

"Indeed, the divide between Latin literacy and illiteracy was always unstable and permeable. We should instead speak of a gamut of Latinities in medieval England: from minimal competence for practical needs, and largely mnemonic command of sacred texts; through the supported access provided by Books of Hours and by the schools; and only ending in the reading and writing of sophisticated literature. This was complicated still further by the ease of aural access to Latin at all social levels. A secular aristocrat might have a clerk read to him or her; an urbanite could attend and absorb parts of public Latin rituals; even a peasant would be able to pick up Latin tags from sermons or the liturgy. We are unlikely ever to have a full and nuanced sense of the extent of lay literacy in Latin; but ongoing research always seems to reveal an increased proportion of laymen who read Latin, or used it ably through intermediaries."

Reading Baswell and leafing through my notes I was reminded of Édouard Jeaneau's prickly prickly remarks in 'Berkeley, University of California, Bancroft Library MS. 2 (Notes de Lecture)', Mediaeval Studies 50 (1988), 438-456 (450-1) about Baswell's citing of Jeaneau's attribution of an Aeneid Commentary to Bernard Silvestris - it's like a wonderful Victor Meldrew moment where he says that he doesn't know in what language he must write in order to be understood! Anyway, in Baswell's (extraordinary) Virgil in Medieval England (Cambridge, 1995), p. 355 n83 he humbly and impressively apologises for the misinterpretation. A lesser scholar would not have handled it nearly as well.
Anyway Medieval English Literature is a treasure trove of material that will serve very well anyone dealing with the Middle Ages.
Posted by Miglior acque at 11:26 pm