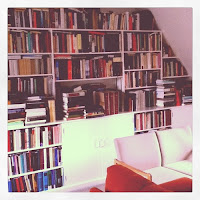 Since I’ve been posting variously on where other people work, I notice that I have not actually posted anything much here on where I work. I’ve put these photos up on my tumblr page, treated appropriately with Instagram’s nostalgic magic. The nostalgia is due to the fact that I shall soon be moving from my rooms in Cambridge when I take up a lectureship at York in October. I’m very excited by this and cannot wait, but I shall be sad to leave this room too. I’ve worked so well here, both for writing and for teaching. In term time, this little flat was also where I lived, and, despite the fact that it is what estate agents euphemistically refer to as bijoux, I always felt that I had enough space. That said, I am certainly glad that I shall have space to expand the shelves a little. 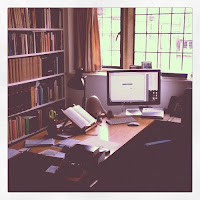 When I moved in, there was very little room for books, and after a bit of gentle hint-dropping, they came and put more in. So those shelves you see in front of my desk (the one with the computer on it), were added. And the shelves you see behind the black table were also added. The table is good, though I did covet those who had desks designed by Luke Hughes (he did work for a new building here, and has done lots of tables and desks in student rooms and in libraries throughout Oxford and Cambridge, a wonderful designer whose work I like very much). Behind my chair, which you cannot see, is mainly Chaucer. In front, is mainly Dante. They look at each other and remind me, sitting between them, of the book I have not yet written. 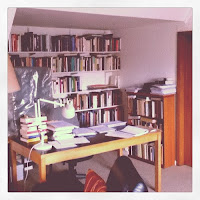 The black armchair is the only piece of furniture in this room I actually own (apart from the office chair—found on the street in Oxford during the first week of my doctorate and with me since—and my little Habitat Book Caddy, of course!). I found it when I went in to Borders in Cambridge, just as it was closing down. Everything was for sale, shelves, sofas, chairs, even the books. So I bought myself a book (Jacques Rancière, The Future of the Image, if you’re curious) and then bought myself a chair, in which to read it. Getting it back to my room was an adventure in itself. Having a second table is also very handy, especially in the depths of the teaching term when there’s a volley of marking to be done in waves each week. 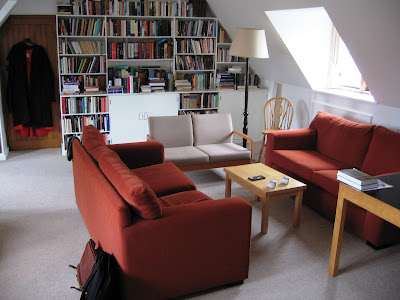 When that volley of marking is done and term is over, then it’s back to Dublin for me. And then I work in a small room in a city-centre apartment. The apartment is a shared space, though the books occupy a large percentage of this space and they are mostly mine. On the wall is a gorgeous head portrait by Brian Bourke, while facing the desk is a lovely piece by Nina Nordenström, who works on paper and does things that look like maps. The desk was a slightly mad buy in Habitat and it took me a couple of years to get used to. In fact, it wasn’t until I cut the legs down a bit that it really felt right. It’s still not quite right, but it’s nearly there. 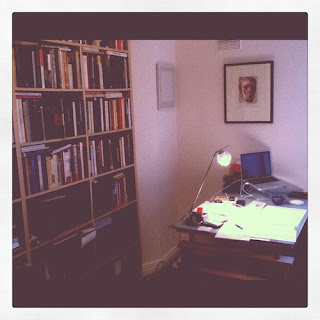 The shelves are in the hall and in the study, though these photos are out of date in respect of what is on the shelves in the study, since I brought a good bit of my Dante over to Cambridge this year. In the corridor, that orange set you see in the middle is a lovely copy of Shackleton-Bailey’s edition of Cicero’s Letters to Atticus (Cambridge University Press), bought for a song at the Trinity College Dublin booksale (to which I have not been in a long time). I have great memories of queuing across Front Square waiting to get in, then dashing around and finding all manner of things. I remember finding a lovely copy of Francis Yates, Giordano Bruno and the Hermetic Tradition and I have just got up now to leaf through a gorgeous copy (still in its box) of Pascal, Œuvres complètes in the Bibliothèque de la Pléiade, which I remember vividly picking up and thinking I’d won the lottery. 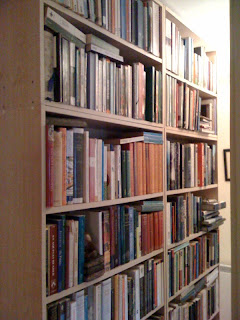 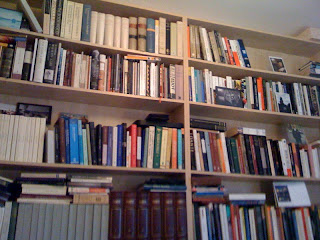 More will follow when I get myself settled at York and, more importantly, when I get the books settled. I do hope they’ll be happy there.

Oh!!! I realise I shall probably never see your Cambridge rooms again----many a happy gin drunk there as part of your ever-magnificent hospitality. They were a wonderful set of rooms; full of calm and scholarship.

Don't! You'll have me going for my second morning gin! Yes, many happy memories, and many of them with you there! We shall have lots more gin in York and Oxford. Never fear.