This year’s New Chaucer Society Congress took place in Portland, Oregon, and it was quite an experience. The most challenging aspect, one that pervaded the entire trip, was the crazy awful jet lag. I’d never really suffered like this before, so from now on I shall have a great deal of sympathy for those in the same boat at future NCSs. Local arrangements were carried out under enormous pressure with several relatively last-minute complications; given the circumstances, it all worked out rather well. The city of Portland is beautiful, it feels very relaxed. Everyone cycles around (it’s not quite Cambridge, but you know what I mean), everyone recycles, and the city centre has a free tram network. Portland is also home to the largest secondhand bookshop in the world. Needless to say, this proved very exciting. I made a couple of visits and found some lovely things: two gorgeous little hardbacks in the Nuova Universale Einaudi series, of Petrarch’s Canzoniere (which of course I had in a much later paperback repr) and Pavese’s Poesie, and a new copy of Nestlé-Aland’s Greek New Testament. I hmmm and hawed over T K Swing’s Fragile Leaves of the Sybil but in the end decided against. At the Congress itself there was a very good, but small, bookstand and I picked up copies of Kolve’s Telling Images, Travis’s Disseminating Chaucer, and Hanawalt & Kobialka’s collection Medieval Practices of Space, which I’ve used and found very good. 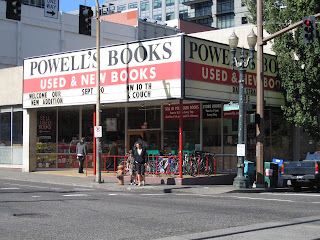 The congress was excellent. I found myself tending towards the ‘Affect’ thread, though I enjoyed some papers a good deal more than other. Amongst those papers I enjoyed, briefly: in the first panel, there were papers by Anna Wilson on Middle English devotional communities and Fan Fiction; Sara Baechle on affective literacies in manuscripts of Troilus and Criseyde, Brantley Bryant (he of Geoffrey Chaucer hath a Blog fame) talked about accounting in the Reeve’s Tale. A panel on England and France had Chris Cannon say that we are placing too much emphasis on French given how few people were actually speaking it; Madeleine Elson gave a beautifully sensitive paper on the Book of the Duchess and Machault; Kathryn Kerby-Fulton talked about scribal treatments of literary texts, concentrating on Arundel 292, a trilingual anthology. The session was chaired by Ardis Butterfield, who made some remarks about Cannon’s paper, mainly trying to set him straight, and a lively discussion ensued. The next session I attended was my own, with really terrific papers by Kara Gaston and Andrew James Johnston. Gaston talked about volgarizzamenti, and the culture of vernacularization; Johnston talked about humanism, Padua and political (politicized) astrological representations. In a feminism session, there were super papers by Betsy McCormick on the Legend of Good Women and the question of the ‘likability’ of the heroines, Laurie Finke on fraternity, medievalism and the Masons, and Ruth Evans gave a tour de force of a paper on Criseyde, psychoanalysis and Lacan. In the ‘Affect’ thread there was a Round Table on displaying, hiding and faking emotion in Chaucer, with Alcuin Blamires on blushing; Annette Kern-Stähler on Troilus and privacy; Sarah Kelen on emotional ambiguity; David Raybin on Griselda’s swoon and Lawrence Besserman on the Physican’s Tale and Prioress’s Tale. Carolyn Dinshaw gave a wonderfully enjoyable presidential address on multiple temporalities in Mandeville, a Victorian satire of Mandeville and the Chaucer Blogger. A short paper panel on Chaucer and Italy was most stimulating with papers by Teresa Kennedy on the House of Fame; Robert Sturges on vision and touch; Leah Faibisoff on the Parliament of Fowls and Tom Stillinger on Orpheus. Another ‘Affect’ panel had Anthony Bale talk about ‘The Prison of Christ’ and incarceration; Stephanie Trigg on weeping; Holly Crocker on Griselda and disaffection; Christine Neufeld on the Clerk’s Tale; William Youngman on the Reeve and Miller; and Glen Burger on Griselda. Bale was excellent, as well as Crocker, Trigg and Burger. Terribly in control of their material. There was a very good discussion of Griselda along the way. There was another super Chaucer and Italy panel, with Fred Biggs talking about the Shipman’s Tale; Rory Critten on Guiscardo and Ghismonda; and Sarah Massoni with a very excellent paper on Wykked Wives and Misogamy. The final session I went to was on Seeing the Book, with papers on John Lydgate’s ‘Sotelties’ by Heather Blatt, a paper by John Plummer on the reading scenes in Troilus and a paper on the MS Corpus 61 frontispiece by Laura Wang. The quality over all was really high. I must say that the Chaucer and Italy sessions were very stimulating and I got a great deal out of them.

One paper I have not mentioned, I saw in the first panel on Affect. It was entitled ‘Illuminated’ by Cary Howie and it was utterly remarkable. Remarkable in its fearless sincerity, its visionary, profound search for a new critical vocabulary, its intellectual depth and breadth, its huge heart. I was absolutely bowled over by it. It was a paper about transfiguration, light, illumination, and it was simply glorious. Howie’s paper was an event bigger than the room. Something changed, the wind shifted, time twitched.

I felt as if I was watching a prophet.
Posted by Miglior acque at 9:51 pm