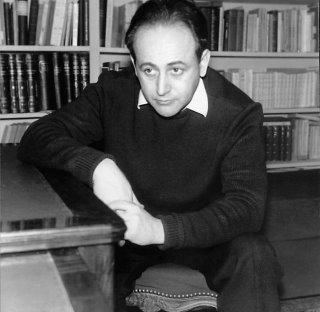 The title of the play refers to Martin Heidegger's Black Forest retreat, a retreat it is said in which he wrote most of Being and Time. After a poetry reading in Freiberg, Martin Heidegger invited Paul Celan to his cabin; Celan accepted the invitation and they spent an afternoon together on July 25, 1966. Celan wrote a poem entitled "Todtnauberg" after this meeting. Otherwise, we have no record of what they spoke about. Celan wrote in Heidegger's visitors' book: "Into the cabin logbook, with a view toward the Brunnerstern, with hope of a coming word in the heart."
It must have been an extraordinary meeting of two extraordinary minds - I cannot imagine how Celan, a labour-camp survivor, and Heidegger, a card-carrying Nazi, managed to make sense of each other. Perhaps they didn't.
Posted by Miglior acque at 5:15 pm

Perhaps they did. Perhaps it was a sort of coming to terms with das große Unheil for Heidegger, and, partly, for Celan. I can well imagine that 'hope of a coming word in the heart' meant an apology. Also, Lacoue-Labarthe in Poetry as Experience remarks that Heidegger had his own sort of national socialism, which was at times irreconciliable with the 'mainstream' Nazism. It was not necessarily the Nazism that Celan suffered under. In this sense, maybe Celan saw the possibility of 'redeeming' Heidegger and Heidegger saw the possibility of redeeming himself through Celan.

Credit for this is due to my German classes last year at school.

Ps.: Tag, you're it. I have spotted you the other day in the Univ buttery ;) a letter addressed to you on your tray identified you.

Perhaps they did. I do neither of them justice, on purpose, I suppose. It's too big to take in in one breadth of thought. Heidegger famously said in an interview with Der Spiegel that he would only apologize for his views if Hitler could be brought back to apologize to the German people. Banville's play certainly does attempt to keep Heidegger's Nazism nuanced. But I suppose the question is, in the middle of genocide, is there room for nuance? And this isn't just a question for those Germans who didn't do anything; this goes for Catholics in Europe too. We all have a share in a responsibility here. I once heard Elie Wiesel speak (in Italy) and he told an old Jewish story about a man going to Rome. He was given a pillow by his mother, who told him at least he could lay his head down, even if he couldn't find a place to stay. He woke up one night because he pillow had caught fire. And it was the night of the destruction of the Temple. And he asked how many of us had burning pillows? How is it possible to sleep?

I'll set my sources the talk of pointing you out to me. You should have said hello in college!

Dunno, the blog phenomenon doesn't seem accepted enough to me just to walk over to someone while waiting for the quotidian curry and tell him one reads his blog. See whether your 'sources' do you a good service ;)

Actually, I think youu're a bit hard with the Catholics. It may be a fact to remember that among Christians, Catholics voted the least for Hitler - Catholicism was traditionally linked to Zentrum and BVP.