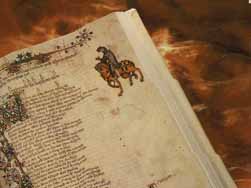 The library in TCD (the alma mater) has a copy of the New Ellesmere Facsimile. I went to see it on Friday. I swear it's almost like turning the pages of a manuscript. You almost smell the manuscript it's so good. It is soooo beautiful. I've never seen anything like it. A collection of essays was published with it, ed. by Stevens & Woodward, an invaluable reference work on the manuscript. It's bound in white calf leather and oak boards, much like a fifteenth-century manuscript would have been put together. The thing that most shocked me is how really luxurious the manuscript is. I know I've read that many times before but until I sat down beside a really good facsimile I hadn't realized just how luxurious. There is so much empty space, a real sign of money in a patron's manuscript. And the borders are gorgeous (see Kathleen Scott's article in the collection above re. dating, which now looks a bit earlier than we thought). And of course we now know the name of the scribe, Adam Pynkhurst (see Lynne Mooney's article in this month's Speculum). One thing is for sure, whoever commissioned this manuscript was serious about his Chaucer and put a lot of effort into making one big and flashy Canterbury Tales, as did the scribe(s). Where did that impetus derive from? Chaucer's death?
Posted by Miglior acque at 11:19 am

Do they have it on LEN?

I know! She was so miffed when I was heading to the photocopier with it: I mean what the problem like!

I don't know what's wrong with this but I posted a comment here and a post last night but it has since disappeared! Had to rewrite it this morning. Hmm.