The Survival of Letters: Faddan More Psalter on Display 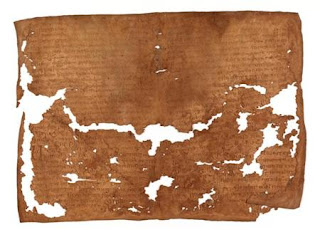 The Faddan More Psalter—discovered in a bog in Co. Tipperary in July 2006—after extensive technical examination and restoration, has gone on display in the National Museum of Ireland in Dublin. Its discovery was the subject of an Archaeology Ireland special, as well as a wonderful documentary on RTE television. Two leaves have now gone on display, as well as the book’s cover—itself a remarkable survival—whose technical examination has revealed the presence of papyrus. The precise meaning of such an extraordinary discovery is still being teased out and will be for some time to come.

They have included a short film on the discovery and highlights of its conservation, and the displays carry some material on the huge task of preserving what remains and understanding it. For example, due to some of the inks used, the parchment has disappeared while the letters themselves have survived, like a kind of 8th-century insular alphabet soup.

If you are in Dublin this summer, this is a must see, the kind of survival no one dared hope for nor thought they would ever see in their lifetime.
Posted by Miglior acque at 3:00 pm