When I count to three, you'll have a PhD 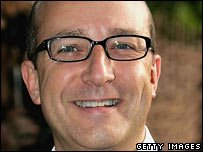 This is Mr Paul McKenna. You may know him from such classic books as Easy Weight Loss and Quit Smoking Now. He is currently engaged in a libel action with the Daily Mirror over claims that he is a fraud. In a series of articles by Mr Victor Lewis-Smith, it was claimed that Mr McKenna bought a PhD from the venerable Lasalle University in the US of A (it's in Louisiana, in case you're passing, or flying over it). You might think that it's a cut and dried affair. Either he has a PhD or he doesn't. Lasalle University's founder actually made up the accreditation body for the awarding of its degrees. Em. Yes. You heard correctly. He set up the Council for post-secondary Christian Education (and nobody thought that sounded dodgy...), and had his university award degrees accredited by it. Mr McKenna claims that he was simply one of the many 'unsuspecting' students duped by this Mr Kirk. Except that it means his PhD has not been accredited. But Mr McKenna claims that the essense of his defamation has been that he bought his degree. As Mr Lewis-Smith wrote: "I discovered that anybody could be fully doctored by Lasalle within months (no previous qualifications needed), just so long as they could answer the following question correctly: 'Do you have $2,615, sir?'
In his evidence today, Mr McKenna insisted that he submitted a thesis of 50,000 words, and had spent over 500 hours of work on it. He has earned this degree.

That means that he finished his PhD in 20 weeks. This is clearly a man who values his timely rather highly.
Posted by Miglior acque at 10:01 pm

Hopefully, the case will come to court in the US, a significantly more defendant-friendly jurisdiction with regard to libel.

As for the statement... A senior journalist of a major European newspaper once told me that libel is not about truth or falsity, it's about provability. I guess that captures the point: never say something you couldn't prove. That includes using ambiguous language, such as 'buying one's PhD' – there is a significant penumbra where one is hard-pressed to distinguish between earned and bought PhDs, and there's no legal definition as far as I'm aware of a 'bought PhD'. What do you think why Private Eye has invented the phrase 'tired and emotional' instead of 'drunk'? Because proving that someone was drunk at a given time is, in that context, exceedingly difficult. Conclusively, it is wiser to say that 'X behaved like a drunk person' than 'X was drunk'. The same goes for 'bought PhD's. It would have been wiser to say what exactly is meant, rather than using an obscure term.

Though, all in all, I have little compassion for people who buy degrees.

Thanks Chris. I suppose I was as interested in what McKenna actually said in his own defence as what was said about him and his "PhD". His plaintive lament that over 500 hours of work must surely entitle him to the doctorate really amused me. I did a quick and conservative estimate of how much time I've spend on my own thesis and it comes to well over ten times that, and I'm not even finished! So I don't really care what he paid for it, or whether the PhD was in fact accredited by a legitimate body (which it was not), it is the extraordinary view that what he did and presented in court as evidence that he is entitled to the degree did not look familiar to me as what would be accepted at a UK university for the degree of doctor of philosophy. Five hundred hours just does not seem like very much.

My parents both did their PhDs when I was young – it took CONSIDERABLY more than 500hrs.

It's a bit of madness, though. Why would one like him need a PhD? Why a PhD? That people buy BAs I understand, you can hardly get a decent job without one in all save the few very meritocratic sectors. But a PhD? I just don't get it.

I think that it is some sort of status symbol, especially outside the academic world. It's like Michael Smurfit using his doctorate given to him in honoris causa, and he's in the business sector. I suppose you don't get any brownie points for having a PhD in academia, but you do outside. Maybe it is supposed to make you look intellekshool.