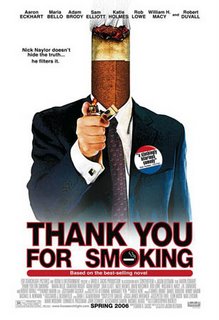 This is a very funny satire ripping the proverbial out of the Smoking debate in the US. The story is told through the eyes of Nick Naylor (Aaron Eckhart), a media spokesperson for Big Tobacco. His job is make sure the public is informed about all those things the anti-smoking campaign cannot prove, and when that does not fail, throw money at the problem. His nemesis is a Senator Finisterre (William H. Macy), who is sponsoring anti-smoking bills in the Senate. The whole movie revolves around the idea of spin, spin by the people for and against smoking. Naylor goes to Hollywood to convince an uber-cool exec (Jeff Magall, played by Rob Lowe) there to make a movie where the stars smoke. The result is a very funny scene where they work out the ridiculous storyline: smoking in space, the final frontier. Meanwhile a journalist, Heather Holloway (Katie Holmes) is writing a piece on Nick and sleeps with him hoping he will talk off the record. He does, and the result is a very funny "exposé". His recovery is even funnier.
This is a very enjoyable, clever, and funny film, poking fun at the complete humbug we are subjected to by big business and politicians and political correctness.
Posted by Miglior acque at 3:33 pm