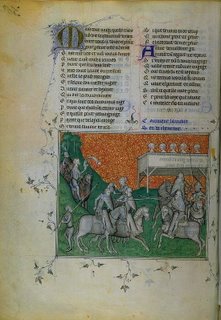 Sylvia Huot's 1987 From Song to Book: The Poetics of Writing in Old French Lyric and Lyrical Narrative Poetry is a stimulating study of the way that medieval French literature developed, during the late-thirteenth and fourteenth-century, a more acute sense of authorship, evinced, she argues, in the changing form of the vernacular codex. The author has clearly a wide knowledge of medieval French manuscripts, especially of the Roman de la Rose. Indeed the RR, she argues, is the great presence throughout the period, providing a model for how poetry can be constructed and how multiple authorship is inscribed and theorized. The crucial mid-point is a fault line where Guillaume de Lorris takes up the continuation of the allegory, changing its focus, and incorporating new themes while weaving together that which has already been written. The idea of the continuation is also explored, as a readerly and writerly response. Think, for example, of the Response to Richard de Founival's Li Bestiaires d'amours, especially the gendered voicing: the response is in the voice of a woman, though that does not necessarily mean that the author was female.

The most interesting part of the book is the third part, "Lyricism and the Book in the Fourteenth Century", which deals with the rise of the single-author codex, especially in the work of Machaut and Froissart. The former provides an especially vivid instantiation of the new sense of authorship in the period and the sense of the control and interaction between the writer and the reader. The book traces the development of a "writerly poetics of courtly lyric and lyric narrative" (p. 329), and it is extremely competent, stimulating, and will strike so many chords to anyone who reads Chaucer, for example. A great companion volume to this book, which I am reading too, is Kevin Brownlee's Poetic Identity in Guillaume de Machaut (Wisconsin UP, 1984). Brownlee is a brilliant scholar and this book is a tour-de-force. Important things happen in France in the fourteenth-century and the direction of English poetry in the period is completely alive to it.
Posted by Miglior acque at 6:26 pm